The Lagash Border Pillar: a white marble stone with a glistening inscription marking the territory 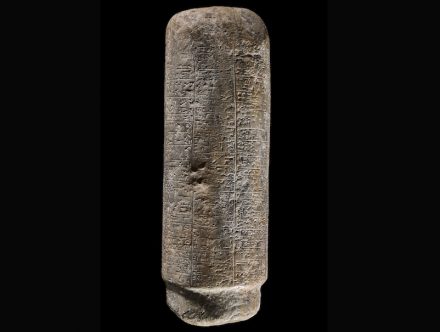 Under the title of „No Man’s Land“, the British Museum is presenting a new display that explores present and ancient perspectives on the territories, landscapes, and borders of the Middle East. Shown is a selection of objects from over 4000 years that embody human’s inability to exist comfortably within agreed borders.

While the first acknowledged borders were natural, human society replaced these with man-made borders that have led to constant conflict throughout history.

The exhibition brings to light also the fragility of borders throughout history. The shown objects document the human desire to dominate land and allude to the brutality and turmoil borders have invoked on those that inhabit them as well as the landscape itself.

Three of the objects tell the story of the first recorded example of prolonged conflict over a disputed border: 4500 years ago, in what is now southern Iraq, the neighboring city states of Lagash and Umma fought bitterly over the tract of land called Gu’edina, „Edge of the Plain“. The ancient objects showcased document the perspectives of the opposing sides, with both territories invoking divine sanction and precedent to justify their claim over the land.

New research has been carried out on British Museum objects, especially for this display. The Lagash Border Pillar has been in the collection for 150 years and this show marks the first time that the inscribed text has been deciphered. Dating to 2400 BC, King Enmetena of Lagash set up this white marble pillar to mark his territory, and its glistening surface would have shone out brightly and assertively under the sun beating down on the plain. 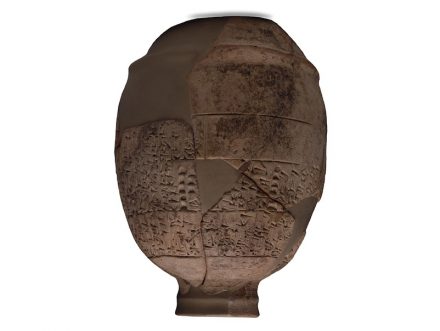 Alongside this stands the Umma Mace-Head made for King Gishakidu of Umma, Enmetena’s contemporary and enemy. Long regarded as a vase, it is now understood that this is a symbolic mace-head which has always been wrongly displayed upside down. On top is a black-painted representation of the battle-net that was used by the gods to immobilize enemies for execution. 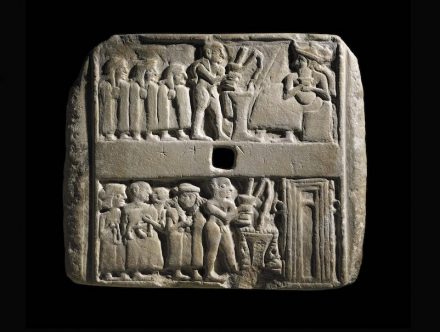 The Ur Plaque also on display in this show illustrates a tradition followed by Lagash and Umma in which offerings were made at the border shrine under the protective eye of the Moon God.

These ancient objects are juxtaposed with two series of photographs by Ursula Schulz Dornburg. Over the last decades, she has created a body of photographic work exploring past and present histories of the Middle East and captures visible traces of the region’s shifting borders and cultures. 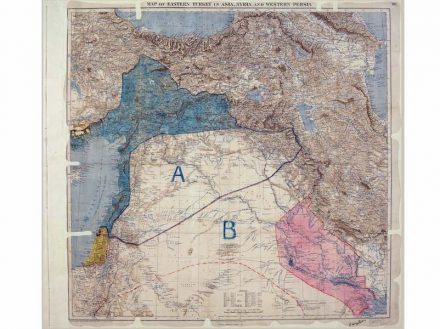 Vividly demonstrating the manipulation of land for political gain is the SykesPicot map, lent by the National Archives for this show. Drawn up in secrecy in 1916 by Mark Sykes and François Georges-Picot before the fall of the Ottoman Empire, the map divided the Middle East into zones of control for the benefit of Britain and France. These artificial borders that decided the fate of the Middle East over 100 years ago contributed to conflicts which continue to this day.

The Smithsonian: the story of the Lagash Pillar