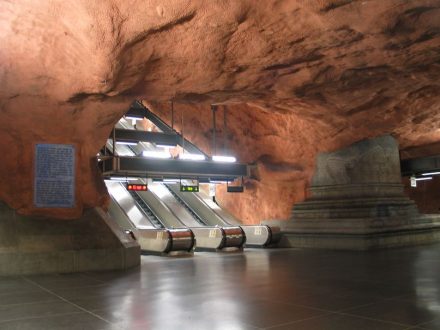 The Metro of Stockholm is the longest art exhibit of the world – what with 90 of 100 stations adorned with sculptures, Mosaics or paintings. The Radhuset Station looks like a cave (1, 2).

„Envie de Pierre“ (Desire for Stone) is the name of a new web-portal of France’s stone sector. Shown are examples for the use of stone in bathrooms, kitchens and architecture. Search-functions help to identify French stones and companies. Trade magazine Pierre Actual is of the initiators (French 1, 2).

„Inbetween Memories“ is how photographer Gabriel Isak titles a picture of two people standing in front of hexagonal columns of Basalt. A famous example for such results of volcanic eruptions is the Giant’s Causeway at the coast of Northern Island (1, 2).

„Altrock“ is a solid surface material made with reclaimed byproducts from the natural stone production. It’s a contemporary take on terrazzo, all handmade by London designers. 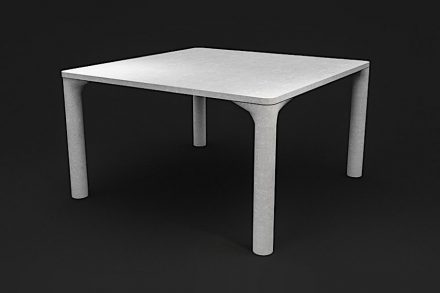 „Fluid“ is the name of a table created by Italian Designer Simone Micheli for Laboratorio del Marmo, an affiliate of Grassi Pietre. The piece of furniture is entirely made of Pietra di Vicenza limestone in the Grigio Alpi shade with a brushed finish.

James Brunt is a British landscape artist who uses stones and other materials from nature. Sometimes, he arranges them to manfalas or cairns.

The book „Archaeology of Touchstones“ reveals new interpretations of such tools often found at ancient burial sites all over the world (ISBN 9789088905179).

The Mughal Gardens of Agra, opposite of the Taj Mahal, have been restored. They are an extraordinary ensemble of the ancient Mughal heritage. The World Monuments Fund, in partnership with the Archaeological Survey of India, has restored the gardens to their original design. After 4 years of complex research and conservation they are again open to the public.

Video of the Month: US Television Network PBS reports on Carrara Marble.