Slam dunk: US basketball player lends an arm to the restoration of an ancient statue 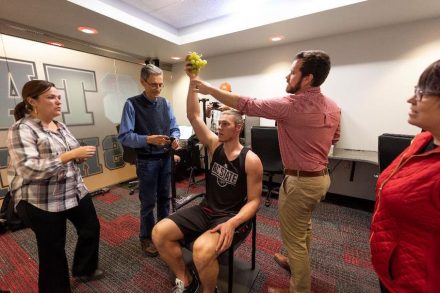 The North Carolina Museum of Art (NCMA) worked with North Carolina State University men’s basketball player Wyatt Walker to re-create the arm of an ancient statue as part of its Bacchus Conservation Project. The 6-foot-9-inch player’s arm was 3-D scanned by Heather Pendrak of Pendragon 3D, with Walker holding grapes above his head in the manner depicted in a 19th-century drawing of the statue, to help artist Larry Heyda of Lawrence Heyda Studios create the new statue arm.

The new arm is crucial to the project, and its proportions must be carefully replicated to create a limb that looks natural and fits with the rest of the sculpture. Considering that the Statue of Bacchus measures 6 feet 8 inches, Heyda proposed that the model be a basketball player, who would have both height and well-defined muscles.

The Bacchus Conservation Project is a multidisciplinary and multiphase endeavor, says Dr. Caroline Rocheleau, curator of ancient art and director of the project. „We have worked and consulted with scholars, scientists, engineers, and artists, but we never thought we’d end up working with a basketball player!”

„I was honored to be able to offer my arm for 3-D scanning to help them complete their work,“ adds Walker, a graduate student forward on the NCSU team. 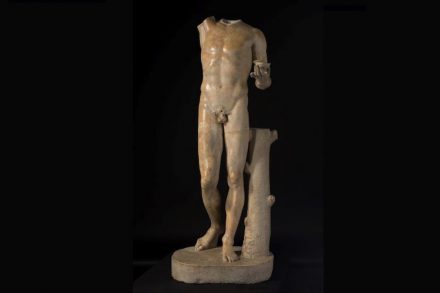 Academic interest in the statue began in the 1960s when classical scholars realized the sculpture was a patchwork comprising a rare 2nd-century Roman torso, a head from a different ancient sculpture, and limbs, hair locks, berries, and leaves that were added later.

A derestoration was begun 30 years ago with the removal of the head, but the treatment did not extend to the rest of the sculpture. The Bacchus Conservation Project was established in 2013 to study the sculpture and complete the derestoration.

Recent research and materials analysis, however, have led the Bacchus project team to reconsider the plan. The team’s scientific, conservation, and curatorial data showed that Bacchus contains more fragments from ancient quarries than previously thought and that displaying each fragment separately did not make curatorial sense.

Together, though, these ancient fragments create a wonderful statue of the Roman god of wine, probably assembled in the late 16th or early 17th century. The team did not want to lose this fascinating and important aspect of the sculpture’s history. The discoveries have made the composite sculpture more interesting as a whole, even with that rare 2nd-century Roman torso embedded in it.

In addition to creating a new arm for the statue, the new conservation treatment will return the statue to its 1960s appearance, reattaching the head to the body.

As the final phase of the project, the Museum will publish a catalogue and host an exhibition featuring the restored statue, with digital experiences to engage the public in the conservation project. Behind-the-scenes interactive programs will explore how the scientific method is used to solve real-world art challenges.

The Bacchus Conservation Project is made possible by Bank of America and the Institute of Museum and Library Services (MA-30-16-0264-16). Additional support provided by Steve and Frosene Zeis and Don Davis and Peggy Wilks.
Support for collection research and initial study of the statue of Bacchus is made possible by Ann and Jim Goodnight/The Andrew W. Mellon Foundation Fund for Curatorial and Conservation Research and Travel.