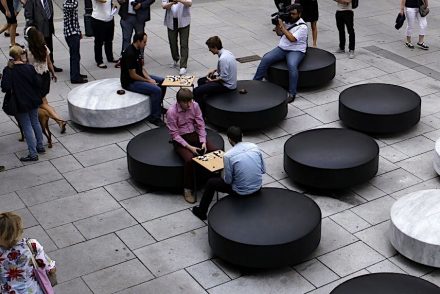 Many say that Vienna is overladen with historic monuments and over-decorated façades in a grim tone, quickly adding that anything modern would necessarily end up being but an Austrian compromise: the new should not look new and should under no circumstance fall out of the frame of surroundings.

We found a lovely case in point and want to report without malice or grim undertone: It is a sculpture by architect Georg Eichinger in Vienna’s Herrengasse juxtaposed to the high-rise.

A dozen large cylindrical stone slabs or disks in black and white marble look somewhat like low-hovering flying saucers and serve as seating in the long-neglected square.

Tourists like to use the 1,5-t stone as seating for a short rest. 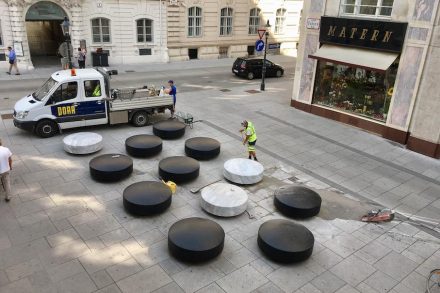 The heritage idea is obvious from a birds’ eye perspective: when seen from above the disks could be stones on a board game, and exactly that is the salient point. In the midst of the city stuffed to the brim with heritage objects architects wanted to make reference to an event which took place in March 2016 when the computer program AlphaGo won 4 out of 5 games against the then world champion, Korean Lee Sedol.

The computer had to process huge amounts of data to calculate the best moves, but the earth-shattering particularity lay in the intuitive capabilities the machine seemed to have. Referring to one of the computer’s moves, masters said later that the computer had a „divine“ unforeseeable idea, according to a source given in English Wikipedia.

Go is considered much more complex that chess where the computer program Deep Blue beat master Gerry Kasparow back in 1996.

Architect Eichinger wanted to invite people to pause and reflect.

But that’s not the only subtle reference. The Nero Assoluto Marble can be seen in several places on the high-rise, e.g. the porter’s loge or the stairway. The stone thus makes reference to the building itself, whose foyer is adorned with an intricate book-match natural stone application. 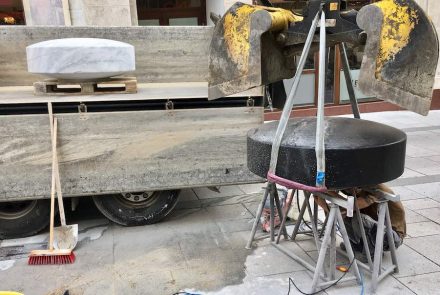 The high-rise itself is a case in point of Vienna compromises. The modern building is devoid of fancy exterior décor presenting pure modern sleek design, but with its 52 m height it clearly passes as a high-rise.

This is owing to the fact that the corniche of the surrounding buildings is adopted while the higher rising tower is receded. It is often referred to as a „masterpiece of understatement“.

Architects were Siegfried Theiss and Hans Jaksch. The building itself was completed in 1932 and was Vienna’s first high-rise.

And yet another bit of trivia: a number of flats were conceived as bachelor apartments or flats for the „working woman“. This was sensational at the time as singles could regularly occupy only furnished flats in strictly regulated apartment dwellings. The tower was even meant to accommodate a restaurant where singles could find sustenance.

And no-sooner was the building completed, „than a sizeable portion of Vienna’s celebrities moved in“, according to the webpage of the heritage foundation.

Marble for Go was provided by Granitwerk Kammerer. The slabs are lit from beneath at night giving them an air of lightness as if they were hovering a few inches above ground.