David F Wilson: one who took it upon himself to seek creative ideas for the stone branch 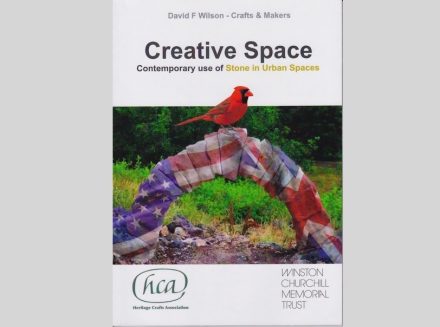 An ebullient enthusiasm for natural stone, stonemasonry in general and for sculpting with stone are evidence of David F Wilsons’s motivation. The Perth-born sculptor was endowed with a scholarship of the Winston Churchill Memorial Trust (WCMT) in the summer of 2017 and travelled across the USA and Canada in search of inspiration and examples of „Contemporary Use of Stone in Urban Spaces“.

However, the summary of his work is meager and contains little news.

His examples of ground-breaking examples are old hat. It is no surprise that he sees sculpting as the Messiah of the stone branch: this is, after all, his line of work and he presents a number of attractive pieces on his webpage.

The summary of his North America tour was published as a pdf on his webpage for download and he had kindly sent it to us.

He concedes a certain loss of craftsmanship and a general demise of stone design in his 60-page report interspersed with photos.

However he does not explain exactly what he means.

The initiator was Tomas Lipps whom Wilson describes as the „de facto Leader of the Stone tribe“.

It almost seems as if Wilson’s aim was to set a monument for Lipps who is in his 80es.

Perhaps he would have done good to tour the British Isles instead of undertaking a round trip to the New World. In England, Ireland, Wales, and Scottland, after all, can be found a lot of successful firms which show schulpture works in outside exhibtions, or their works at the London Stone Fair or at the Stone Federation GB’s awards.

Or why did he not undertake a trip to Italy and Marmomac?

„Creative Space. Contemporary use of Stone in Urban Spaces“, download