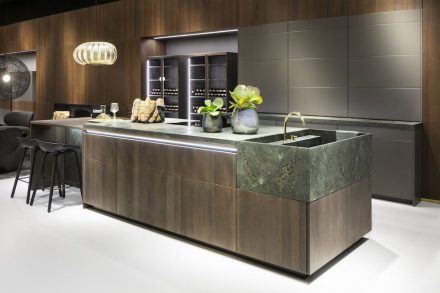 A good kitchen is, by definition, the „state-of-the-art heart and soul of every home“, according to the Arbeitsgemeinschaft Moderne Küche (AMK, Working Group on Modern Kitchens) CEO, Volker Irle, at the IMM Cologne/Living Kitchen Trade Fair (January 14th to 20th 2019). A room dedicated to preparing meals is a „space filled with technologically innovative appliances, modern design, and sensual material but at the same time a space for social interaction and individual needs.“

The IMM Cologne opens its gates every year. It is one of the leading and most important Trade Fairs for furniture and design world-wide. Biannually, as was the case this year, the theme is Living Kitchen. AMK boasts more than 140 associated companies including manufacturers of furniture and appliances.

The AMK is optimistic as far as development is concerned. An increase of +6% in the building market is expected. „He who builds a home will provide for a kitchen“, as Irle follows through.

But according to studies carried out by consumer experts at the GfK Consumer Research Association, the boom of the past decade (+53%) will recede. 2018 saw the first year of negative growth namely (-)9.3% albeit with an increase in value. I.e.: the trend toward high-end kitchens is unchanged with the top price segments profiting most, according to GfK.

„Dark grey and black are the colors of choice this season. Black is also popular for appliances as well as for cabinets in combination with classic warm metallic tones like gold, brass and copper. In the spectrum of grey tones, concrete optics are popular with some target groups, albeit a niche for those who like it“, according to AMK.

A total of 217 exhibitors from 28 countries displayed their wares in the Living Kitchen segment, according to the Fair Organizers.

Engineered stone and quartz-composites had the upper hand over natural stone.

But for furniture, e.g. for the living-room areas, we have been showing a growing trend toward stone, e.g.: for table tops. Here, too, ceramics and engineered stone are gaining ground. Some are barely distinguishable from the Real McCoy.