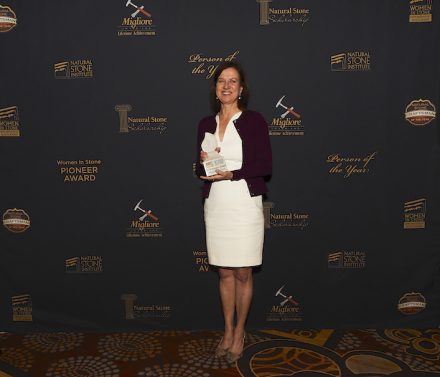 Monica Gawet from Tennessee Marble Company is the recipient of the 2019 Women in Stone Pioneer Award. Gawet is a third-generation marble fabricator and a first-generation quarrier; one of only a handful of female quarry owners in the world. Her passion and commitment for the stone industry and producing the highest quality stone products in a safe and efficient environment are obvious to those who get to work with her.

Josh Buchanan, Business and Relationship Cultivator at Tennessee Marble Company said: „I see a respect for her in the men and women that work here that makes it obvious, she is not a figure head, she is the real deal, not allowing even an inch of disrespect or over stepping boundaries from her team.” She walks the floor and engages her team at every level.

With her hard hat and rubber boots, she can be found out in the quarry, actively promoting safety, strategizing plans for best yield with the quarrymen, and pushing everyone toward professional development.

The construction industry can be a male dominated environment, but Gawet’s peers have witnessed her resiliency to uphold her values. Donna Lester, administrative assistant to Gawet for 23 years, said she has been inspired by her inner strength, bravery, and ability to stay calm, maintaining complete composure in difficult situations and turning them into positive outcomes for all involved. It’s an impression and a reputation that extends throughout the industry.

Her industry involvement included serving as president of the Marble Institute of America in 2001, as well as on numerous industry committees.

Gawet is an admired Women in Stone mentor and has earned accolades not only from her peers in the stone industry, but also for leadership and service to her community.

Awardees had been Kathy Spanier from Coldspring (2018) and Brenda Edwards from TexaStone (2017).