Several new products using natural stone or competing materials received one of the 2018 Red Dot awards. „Break“ is the name of an innovative eyeglass frame by Austrian ROLF – Roland Wolf GmbH using stone and wood (1). The Zhongnan Mansion is a clubhouse with marble on the floor and on the sweeping staircases. Design by Kris Lin Interior Design, Shanghai (2). The „Flux“ wall panels are made of quartz composite used here for a organic stylistic idiom. Manufacturer was German Steinwolf company, design by Corian Siedentopf, Germany (3). The „Xtra“ Worktop by German manufacturer Pfleiderer has a natural stone appearance. Its multilayered composition allows easy flush-mounting of sinks and hobs (4). „Optima“ is a new collection of ceramic tiles by V&B company. The tiles have maximum sizes of 120 x 260 cm and imitate concrete or natural stone (5). We will separately report about the lamp „Wandering Star“ by Canadian company Viso.

Mankind uses too much sand, scientists are warning. An unusual contribution to the topic comes from the Arctic: Greenland should sell the sediments from its thawing glaciers, researchers from the University of Colorado Boulder, the University of Copenhagen, Arizona State University and the Rhode Island School of Design recommend. 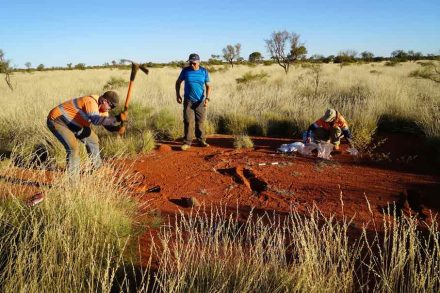 Fairy circles are round gaps in arid grassland that are distributed very uniformly over the landscape and only occur along the Namib Desert in Southern Africa and in parts of Australia. Scientists from Universities of Göttingen, Australia and Israel have found out that the circles in Australia were caused by processes such as the weathering of the soil by heavy rainfall, extreme heat and evaporation. The data collected by the researchers argued against a causal relationship to mysterious beings or underground termite structures.

„Seven Seas Splendor“ is the name of the largest seafaring passenger ship, which will begin its maiden voyage in 2020.The ship’s highlight is a luxury suite with plenty of marble (1, 2).

„Apea“ (Aree Produttive Ecologicamente Attrezzate, regions with ecological production) is an Italian program to steer companies in a sustainable direction. Recently, the marble firms from Lazio province received access to the funding (Italian 1, 2).

Video of the Month: global warming will make extreme weather changes and natural disasters in the years to come a matter of course. UNESCO has named the avalanche risk-management program in place in Austria and Switzerland an Intangible Heritage. The population in alpine villages have learned to overcome the dangers of large snowfields.