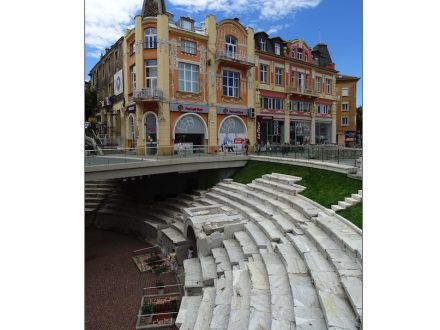 As always, the editors of Stone-Ideas.com researched what the cities have to offer in terms of natural stone

Let us begin with Plovdiv, the less well known of the two. It is the second largest city of Bulgaria and lies half way between the Balkan Sea and Istanbul. Anyone on a foray in Asia passed through – the same holds true, of course, for Asians with a destination to Europe or vice versa. Thracians, Greek, Romans, Turks, all with realms of their own, left their mark in stone in today’s Plovdiv, e.g.: the stadium or the theater from Roman times.

Not much is left of the once grand monuments or of the Roman conquest: one was the military thoroughfare Via Militaria, once the most important connection between East and West and one of the few paved roads providing entirely new possibilities for troops and for trade.

The Plovdiv-Plateau is not large and when leaving the city one soon encounters the Rhodope-Mountain-Range where deep gorges and canyons provide for remarkable rock formations to the pleasure of hikers. We mention but two and provide readers with links to corresponding pages: the marvelous bridges and the Stone Mushrooms.

The antique city of Perperikon, some 100 km from Plovdiv is also worth a look. It is partially built in stone but partially excavated from the jutting rock wall. 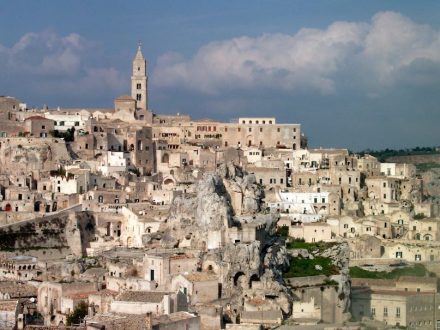 Matera‘s distinguishing factor are the Fondarca caves and cavities dug into the Gravina Gorge. The city is situated in the Basilicata Region of Southern Italy, the most impoverished region of the country, Mezzogiorno. The caves and cavities were included in the Unesco World Heritage List in 1993, cult places and burial sites since the Bronze Age.

Population of the cliff and gorges began earlier still in the stone age, when man discovered that the soft tuff of the gorge offered easy protected building material. Some 3000 caves and caverns were built or dug out; some of these go 15 m deep into the stone.

From the Middle Ages onward, dwellings were built into the rock always up along the cliff wall creating the impression of a cliff-hanging city with many small chapels connected by stairs. To get from one building to the other, one must meander between steep walls and the cliff. Sasso Barisano and Sasso Caveoso are the names of the districts – together they go by the name I Sassi: The Stones.

What may sound quaint and romantic was, in fact, the epitome of paucity in the first half of the 20th century. In his novel „Christ Stopped at Eboli“ author Carlo Levi compared the situation with Dante’s Inferno.

I Sassi was a symbol of underdevelopment of the Mezzogiorno Region. The Government resettled the cavern dwellers in the 1950s giving them new homes in Matera alongside the antique city center.

I Sassi was fenced in for some three decades, during which the caverns and caves deteriorated: The claim that Matera (next to Jericho) was one of the most ancient cities with continued settlement, is not quite the full truth.

But in 1980 I Sassi was rediscovered and refurbished along modern standards but without destroying the historic picture. The World Heritage Status was a big help.

The largest portion of I Sassi belongs to the Italian State and is merely leased to district government. A special administration called „Uffizio Sassi“ manages life and oversees tourism.

Note: Matera won the status of Heritage Site over such contenders as Siena, Ravenna or Perugia.

Since 1985 the European Union has named two cities European Capitals of Culture with the aim of raising awareness of similarities.

Choosing the winners is a lengthy process as the cities must present a detailed concept and put it into place after receiving the title.