Exhibit at the Pulitzer Arts Foundation: Why certain parts of sculptures from Ancient Egypt are broken 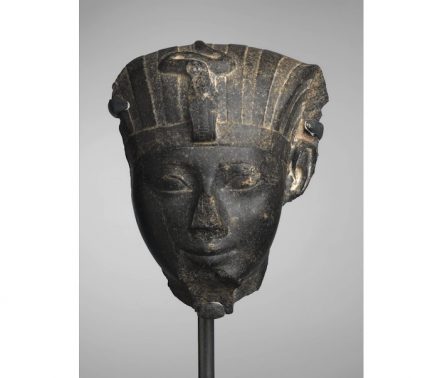 What looks like pure vandalism, often was a carefully considered act to tear away the power from a ruler’s representation in stone

„Why are the noses of so many Egyptian sculptures broken?“ is one of the questions answered in the exhibition „Striking Power: Iconoclasm in Ancient Egypt“ at the Pulitzer Art Foundation in St. Louis, MO until August 11, 2019. For example in the granite head of Hatshepsut, ancient Egypt’s best-known female Pharaoh (reigned ca. 1478–1458 BCE): „Her nose was damaged to prevent her spirit, believed to live within the sculpture, from breathing“, according to the foundation’s press release.

Damaged was also Hatshepsut’s „uraeus, a sacred cobra that was an emblem of divine power and gave the statue its protective power. Her beard, a symbol of royal legitimacy, was removed to invalidate her rule. Finally, the head was severed from the body, effectively de-activating power inherent to the sculpture.“

Comprising some 40 masterpieces on loan from the Brooklyn Museum, the exhibition analyzes the motivations behind the destruction or defacement of objects and thus comes to a more expansive understanding of the art of ancient Egypt, where images functioned not only as a means of representation, but also as containers of intense and powerful spiritual energy.

Moreover, what at first sight appears to have been random acts of vandalism were in fact carefully considered and targeted actions intended to deactivate an image’s strength.

By this, the exhibition raises timely questions about the power of images and their role in shaping memory and legacy.

„Striking Power“ examines iconoclasm in Egypt during three eras: the Pharaonic Period (3000–30 BCE), with a focus on the legacy of Hatshepsut; Late Antiquity (200–642 CE), when the systematic destruction of objects and temples was undertaken by early Christians; and the Islamic period (642 CE to the present), when statues were sometimes re-appropriated as building materials.

Through thoughtful pairings of damaged works, from fragmented heads to altered inscriptions, with undamaged examples, it illustrates the myriad ways in which multiple cultures came into contact with the objects, while enabling viewers to observe patterns of destruction.

In the Pulitzer’s expansive main gallery, a group of mostly freestanding sculptures provides an overview of the types of damage inflicted during each of the three periods in question. 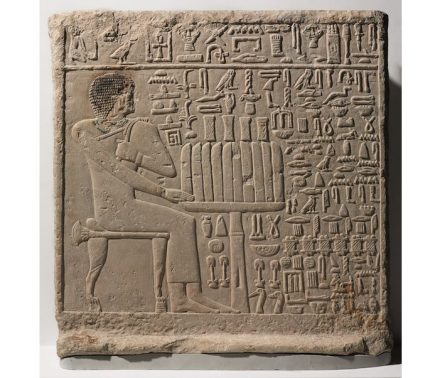 Highlights here include The Stela of Setju, a limestone relief that was once part of a tomb. It depicts the tomb’s occupant, the nobleman Setju, seated at a table and reaching with his right hand for food required for his survival in the next world. Damage inflicted on Setju’s face and right hand was likely carried out by those – perhaps tomb raiders or political enemies – who wished to disable his source of nourishment and power in the next life, so that he could not seek retribution for their crimes against him. Additionally, the abrading of the hieroglyphs that spell Setju’s name at upper left indicates the image was targeted in the Pharaonic Period, when this type of writing was still understood.