The marble steps of the Holy Stairs in Rome will be accessible without wooden protection for about 40 days after April 11, 2019 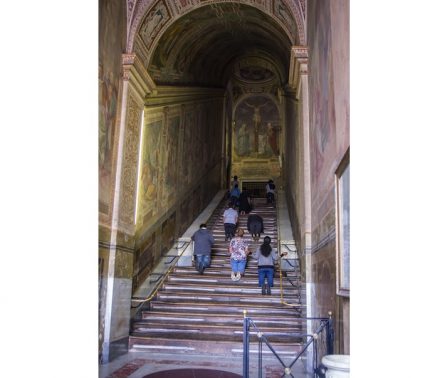 Staircase is said to originate from Pilate’s palace and to have been stepped on by Jesus / Reinterpretation: Jesus before the prefect

In the sacred places of many religions, stone plays an important role, e.g. in the Kaaba in Mecca. On April 11, 2019, Catholicism will have a special event with marble at its focus: then the Holy Stairs will be revealed to the public and will remain open for praying for a few weeks. They had been covered by wooden protection for about 300 years, but during the last year, the cover was removed for restoration while the staircase had been closed for the public.

According to the tradition, the 28 steps in the Sanctuary of the Holy Stairs in Rome are the ones Jesus had climbed before Pontius Pilate showed him to the crowd and then send him to be crucified. In 326 A.D., Christian emperor Constantin’s mother, St. Helen, had brought the marble pieces to Rome, as the Catholic News Service (CNS) reports.

Since Pope Sixtus V ordered a sanctuary to be built, pilgrims traveled to the site.

By 1723 „millions of people (had) climbed the steps on their knees, slowly and unintentionally digging deep undulating ruts and furrows into the soft stone,“ according to CNS. 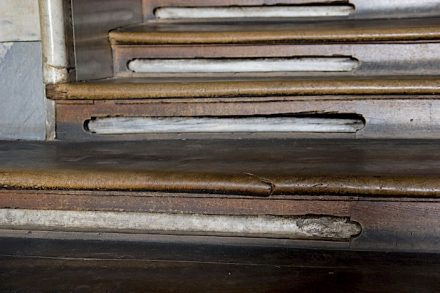 Wooden protection was installed, but it also had to be restored several times since then. The last renovation had been done in the past 12 months while the Holy Staircase was not accessible for the faithful.

Considered against the background of historical facts, Jesus at Pilate’s court is a strange story: on one hand, we know from the historians that Pilate was an experienced prefect of Ancient Rome and a hard governor. Yet in the New Testament, he appears to be weak and driven by the Jewish high priests. A source for antisemitism lies in the scene.

As it had to be in a trial also in Ancient Rome, the judge gives the defendant the chance to explain himself. „Are you King of the Jews?“ Pilate asks.

This may be understood as a simple „Yes“. But one might shift the stress in the spoken answer and then it would read „YOU said that“.

This is an evasive answer which completely changes the setting: for Pilate the reply is unacceptable and a disregard of the Roman emperor.

His reaction was as it had to be: he will teach the guy to respect the mightiest man on Earth – Jesus is sent to torture.

When he is brought back, Pilate repeats his question.

Pilate is patient and orders the same procedure.

Then the same question, again. And Jesus?

Now the juridical situation has dramatically changed: the defendant has committed a lèse-majesté. There is only one penalty in Roman law for that and Pilate without a moment of hesitation sends Jesus to crucifixion.

Professor Rosen’s interpretation of the scene was: Jesus used Pilate and the Roman law to fulfill the Messiah-prophecies. The Jewish played no role in this setting – Jesus brought himself to the cross.