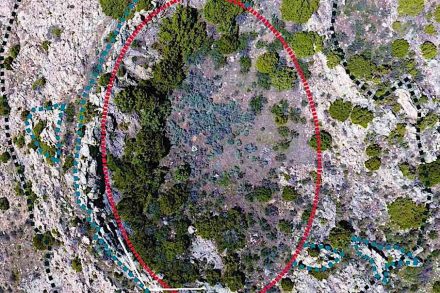 When small asteroids with a diameter of a few meters hit the Earth’s atmosphere, they are slowed down and broken up by friction. When the celestial body is made of solid iron, each of the pieces can tear a crater in the Earth’s surface. That leaves a strewn field of craters, each up to 100 m across.

A team of German and US-American scientists has discovered a 280 million year old meteorite strewn field in the deposits of the Rocky Mountains of the western USA. It is the oldest and biggest known strewnfield of craters on Earth. The team has published its study in the journal Scientific Reports.

Up to now, only 6 such crater strewn fields were known on Earth, all of them geologically recent and limited to distribution of 1 or 2 km.

The now found fossil field of meteor craters in the Rocky Mountains is at least 7,5 km big and consists of more than 40 craters. But it may be bigger, with further craters as yet undetected in the layers of rock. „We are probably only looking at a small part of the whole crater field,” says Kenkmann.

280 million years ago the remnants of an asteroid struck a flat, sandy coastline. The sand particles were compressed to such an extent that the shock created quartz crystals which can still be found under the microscope today. The craters were well preserved because they were covered by a layer of clay shortly after their formation. Researchers are now investigating what influence this cosmic collision had on the environment at the time.