Connecting the deserts in the American West to space, time and light: „Roden Crater“, „City“ and „Star Axis“ 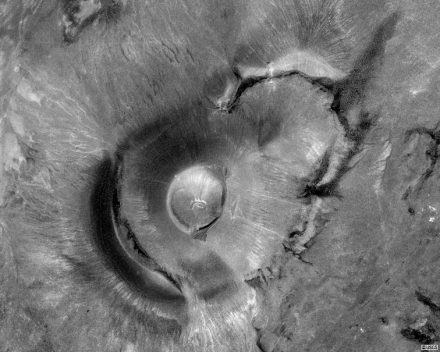 „Roden Crater is a place to observe light, time and space“ is the welcoming slogan on the webpage of this outstanding artistic project in Arizona’s Painted Desert. It is located in a 400,000-year-old volcano crater with a width of 2-3 miles, bought in 1979 by artist James Turrell and since then under work to become a very special place on Earth. People have already compared it to Stonehenge.

The nightly darkness of the desert and an underground system of tunnels and rooms with openings directed to the stars shall allow the visitors to make unique experiences. „Naked eye observation“ is a key term in Turrell’s idea.

„While minimally invasive to the external natural landscape, internally the red and black crater cinder has been transformed into special engineered spaces where the cycles of geologic and celestial time can be directly experienced,“ is said on the webpage. „It will constitute a truly culminating phenomenon in world art.“

In recent articles, journalists reported about an opening in 2024. New is a partnership between Turrell’s Skystone Foundation and the Arizona State University (ASU) seeking „to raise at least US-$200 million to preserve Turrell’s legacy by building infrastructure at the site, including a visitor center, and ensure conservation of one of the nation’s most renowned cultural assets“, as said on the university’s webpage.

The project shall also become part of ASU’s academic programs.

More land art projects are going on in the remote areas of the US West. Michael Heizer’s „City“ in the Nevada desert is projected to open in 2020. It „is inspired in part by Native American traditions of mound-building and the ancient cities of Central and South America,“ according to the webpage.

Another one is Charles Ross’s „Star Axis“: „The sculpture’s name refers to its primary earth–to-star alignment: it is precisely aligned with Earth’s axis, which now points toward our north star Polaris,“ as explained on the webpage. It is due to open in 2022.