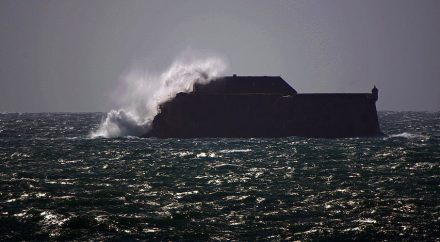 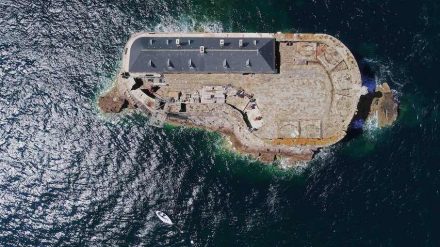 Erected under the reign of Luis XIV, the Fort was badly damaged during WWII but restored almost completely since then

If, by chance, you, dear readers, should take the ferry from Portsmouth or Bournemouth to Saint-Malo across the English Channel, don’t miss taking a glance to the left before the Port on the French side. This is where an islet, some 70 m long and 25 m wide juts out of the sea barely above the waves. Zoom in with your camera, weather permitting, to see a gem of French fortress constructions and an example of the craftsmanship and artistic skills of masons and stonemasons of the times.

Quincé is the name of islet, where there is nothing but the Fort with its steep walls seemingly growing straight out of the water. The master builder was non other than Sebastian Vauban under contract of the Sun King Louis XIV.

The military background of the Fort is self-explanatory from the vantage point of the ferry: whosoever could point his cannons in the direction of the English Channel should have been certain that no enemy warships could approach and fire on the coast of France.

There were many reasons at the time: Saint-Malo housed the pirates working for the King and was positioned strategically where British or Dutch trade ships would sail along.

Construction began in 1692. Soon, Ludwig’s greatest fears were to prove true: in 1695 an enemy squadron anchored in the bay of Saint-Malo and fired on the Fort under construction.

But the attackers achieved nothing. 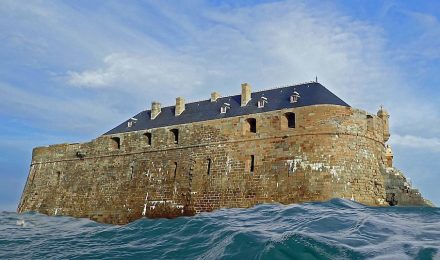 And no wonder! The sleek granite walls, jutting several meters out of the sea, are high enough to allow an unhindered line of fire on enemy ships.

Due to the heavy swell, making fast was nearly impossible even at low tide, and then there are the Atlantic Storms.

Even recently, investors had some experience with these storms: In 1984, forty years after American bombers destroyed the buildings within the Fort, a French family wanted to begin reconstruction – but the harsh winter weather conditions simply swept the construction site and equipment away never to be seen again. 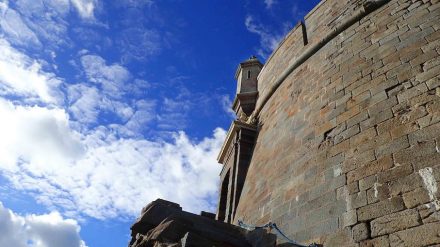 In 1989 the Compagnie du Fort de la Conchée undertook a second attempt at reconstruction and bought the island. The enthusiasts have since achieved remarkable progress, and the Fort is nearly entirely restored. They also discovered some particularities in the art of stonemasonry of the times.

Construction was, of course, a sustained battle with enormous difficulties: the first of which was to build a landing. Having completed this task, the entrance portal had to be shut with a gate to keep out youths, who in the past, had dismantled wooden beams and burnt them as firewood; but now some of the trespassers were well versed in tools and took a liking to some of the historic decorative stones.

But the enthusiasts learned quickly after reconstruction had begun in 1996.

One example: for lack of other means, a helicopter was engaged to transport the 900 kg key beam for the roof construction of Logis 1 and position it precisely – after this feat, it became clear that this was, in fact, the best and cheapest method of transportation and installation for certain heavy elements. 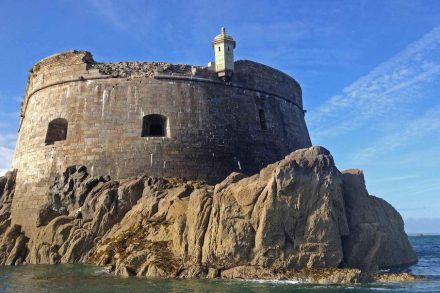 A number of details were worth mentioning:

* The distinctive corner turret had been torn away completely by grenade fire; reconstruction was undertaken by scholars of the Lycée Technique de Quintin, albeit in lighter granite than the original;
* There was a large breach in the outer wall which had to be closed before reconstructing the interior – installing scaffolding on the outside wall was a feat in itself as was the transposition of the 100 kg stones for the wall;
* Portions of the terraces were originally constructed to support automatic cannons; the old flooring elements were split and reclaimed thus avoiding an entire new flooring. 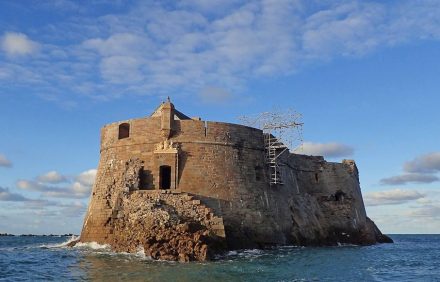 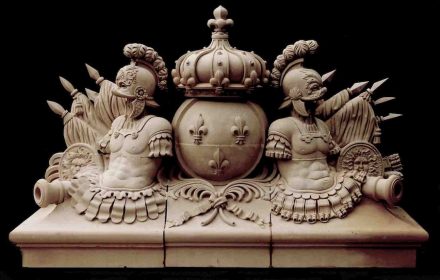 * A gem of the stonemasonry is the work above the entrance portal; It is an allegory of the army of Louis XIV; Stonemason Ianek Kocher worked a new version from Pierre de Caen limestone – particularly resistant to salt water erosion. 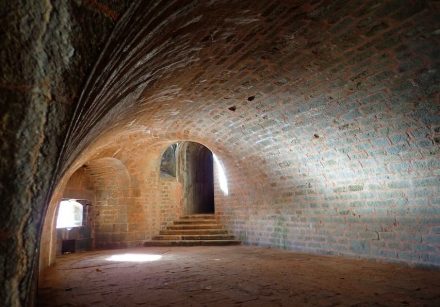 The chambers in the belly of the Fort where cannons were stored is a fascinating world all its own. The masonry is mentioned on the Company’s homepage: „Each and every stone in the vault is uniquely cut for a hand in glove fit on all surfaces“. 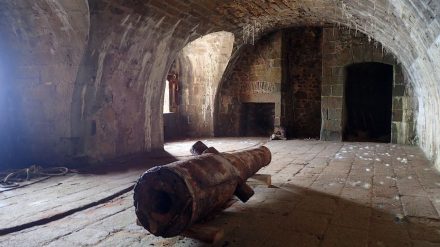 Heavy damage had been done by water seeping through the ceiling and walls. It looked more „like a sea-cave“ with stalactites and stalagmites, as said on the homepage of the Compagnie.

Sediments were removed with a light sandblasting.

But the work on the interior was relatively minor, as explained on the webpage: „Vauban’s Fort was conceived to withstand 200-pound mortar fire from warships, and it would have resisted cannon attacks of American war ships in 1944“. Prior to the bombing by the allies, the Fort had been a target practice site for the German troops.

80% of the work is completed according to Bernadette Benoist of the Compangie. She estimates that another 1.9 million € will be needed. The Compagnie is calling for contributions to finance completion of the project.

Ianek Kocher has described his reconstruction of the Allegory in Pierre Actual. Download the article for 12 € (French).