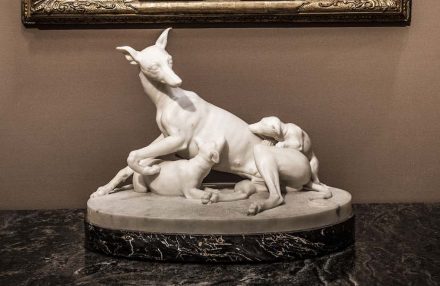 In this small work, the sculptor depicted protective maternal love and vulnerable infancy

„Greyhound with Puppies“, a small marble sculpture regarded as one of artist Joseph Gott’s best works, is now on permanent show at the Barber Institute of Fine Arts at the University of Birmingham.

Gott (1786-1860) was a British-born sculptor who, having arrived in Rome in 1822 thanks to a small pension from then RA President Sir Thomas Lawrence, established a successful studio making sculptures for aristocrats travelling on the Grand Tour.

Gott’s studio quickly forged a reputation for specialising in works featuring children and dogs. In the case of the latter, likely because there had recently been major discoveries of ancient Roman sculptures of greyhounds, which inspired the visiting gentry to commission Gott to immortalise their own dogs in terracotta and marble. 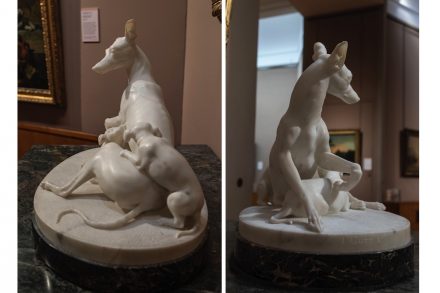 Gott was a skilled modeller able to capture realistic expression and gesture in his portraits, animal and human, and his smaller marbles (such as Greyhound with Puppies) retain these qualities alongside extremely sensitive carving and finishing. During his lifetime, Gott was once described as ,the Landseer of marble.’

Greyhound with Puppies can now be seen in the Barber’s Beige Gallery, on display near Etienne Aubry’s Paternal Love (c.1775), a painted celebration of human parental love and family sentiment, and A Rhinoceros called Miss Clara, the Barber’s iconic bronze of an exotic celebrity animal. 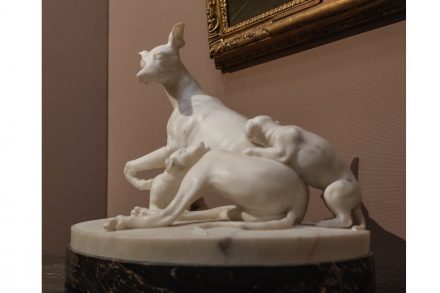