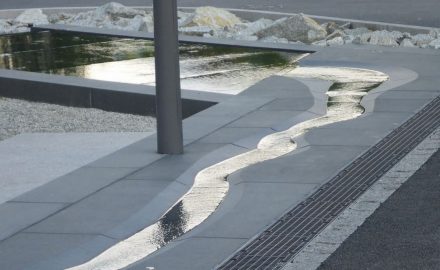 France’s natural stone branch is recovering nicely. „Our export turnover reflects the dynamics in the local economy“, writes Claude Gargi, editor in chief of the Trade Magazine Pierre Actual. He compiled detailed statistics on stone trade in 2018 in his 3/2019 edition.

As is the case in many European countries, in France natural stone imports by far exceed exports. In 2018 the country grossed 325.7 million € (1.04 million t) reflecting an increase of +7.5% by value and +7% by tonnage compared to the year prior.

Note that according to statistics, paving stones made up a large portion of imports as well as exports (between 25% and 43%). This can be seen all over the country: public spaces, paths and walks are restored with great attention to detail using natural stone slabs or cobblestones.

Gargi is even expecting an increase in these sectors in the near future pointing to the planned „Grand Paris“ public sector modernization projects and the Olympic Games 2024.

He also takes a detailed look at another aspect: imports from China were down by 8000 t, while those from Portugal and Spain increased by 9000 t respectively.

This, he concludes, might be a first sign that the price discrepancies between Asia and Europe are melting and that European suppliers are becoming more competitive.

But he points out that France increased its purchases from India by 14.000 t compared to the year prior.

Granite raw blocks from local quarries were exported mainly to Italy and Poland.

Gargi hopes that the positive signs are just the beginning of an increasing trend: „French natural stone producers have all the necessary capacity to be an important contender in the international stone market“.

The article in French language can be downloaded for 5 € (French).