Artist Alicja Kwade’s „ParaPivot“ natural-stone-installations are on view at the roof garden of the MET until October 27, 2019 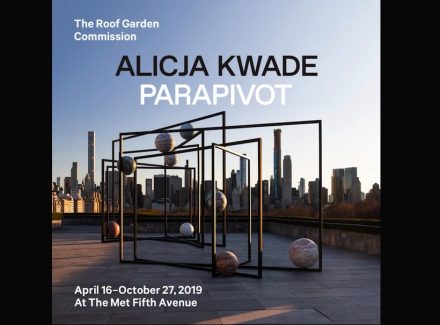 Two celestial installations using natural stone have been created by Polish-German artist Alicja Kwade for the Cantor Roof Garden of the Metropolitan Museum of Art in New York City. They resemble very much a planetary with celestial objects set against the skyline and the Central Park and are on view until October 27, 2019.

Alicja Kwade’s preferred topics are perception and reality. She has created many installations using watches asking what time is and what the watches show, and in her „WeltenLinie” for the 2017 Venice Biennale, she had used a composition with a steel frame, mirrors, and boulders, similar to the one now at the MET’s Cantor Garden.

The two sculptures, „ParaPivot I” and „ParaPivot II”, have a structure of black steel beams in which colorful natural stone boulders are inserted. „For example, there is white Carrara marble from Italy, green Mazi quartzite from Finland, and red marble from Portugal“, as said in a report on the Hyperallergic webpage.

The fact that there are 9 boulders reminds the author of Hyperallergic of our Solar System (before Pluto was downgraded as „Dwarf Planet“).

Most fascinating in Kwade’s ParaPivots is to look through the voids between the stones and the steel frame, Hyperallergic reports: suddenly, the skyscrapers or Central Park’s green seem to be part of the endless cosmos. Again, the question is: What is real? What do we only believe to know?

The MET’s press release gives a CV of the artist: „Born in 1979, Alicja Kwade lives and works in Berlin. Raised by a cultural scientist mother and a conservator and art historian father, she grew up in Poland and, later, Germany. In 1999, Kwade entered the Universität der Künste in Berlin to study sculpture, and three years later she began showing in solo and group exhibitions, achieving a remarkable degree of critical success in a relatively short period of time. Although Kwade has also made videos and sound art, she is best known for her sculptures and installations, most of which are designed with specific spaces in mind. With equal parts poetry and critical acumen, her work not only reflects on the nature of time and perception; it also investigates the structures and theories we have adopted to understand the physical universe in which we reside. The resulting works are elegant, astute, and highly experiential.“

The Metropolitan Museum of Art