Milan’s FuoriSalone: the grand furniture forum outside the fairgrounds in the city center 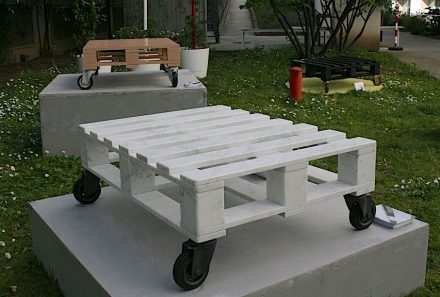 Design companies present themselves in galleries / Since some years, there is little room left for young designers and design schools

FuoriSalone and the furniture fair (Salone del Mobile) belong together like unlike sisters. Translated: „Fair outside the Fair“ FuoriSalone is a presentation of designer objects in galleries, showrooms and defunct industrial venues which are re-appropriated for the duration of the fair.

FuoriSalone is, to a large extent, the reason why Milan has gained the title of design capital of the world.

The two most prominent exhibit sites for FuoriSalone were the via Tortona and the district of Lambrate where young designers and design schools showed off their unconventional work in defunct factory buildings or in shops temporarily not in use.

Both of these sites have lost their charm in the last few years: well-known brands, e.g. automobile manufacturers, producers of watches, or hotel chains reserve space for renown designers to exhibit their elaborate projects.

They are not at all bad, but they lack the wild creativity of the past preferring instead to use design as a means for marketing.

But we found three designers in the Lambrate District working with natural stone: 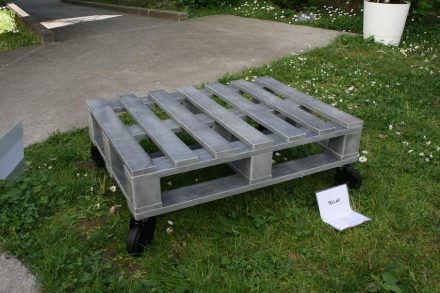 Massimiliano Dalle Sasse showed hos works at the FuoriSalmone (note the play on words in the name). He calls his tables – also available with wheels – „w”. He uses waste material from marble production. The stone slabs are a mere 12 mm thick so that the entire tabletop weighs no more than 15 kg. Various types of marble are possible just as one might envisage various types of presentation depending on the need. The tables are produced in a marble factory in Genoa with a 70-year tradition of craftsmanship.
Enter 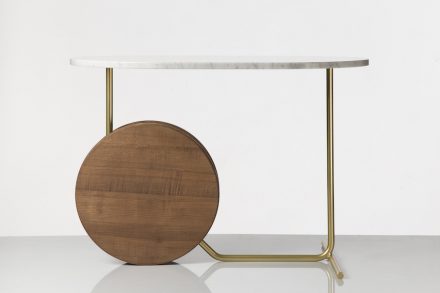 Studio Nove 3 displayed tables with marble. Side table „Rollin“ solves the age-old problem of mass. Furniture made of stone slabs are usually too heavy and lack mobility. We put it to the test: The table is highly mobile and can be moved back and forth with ease. 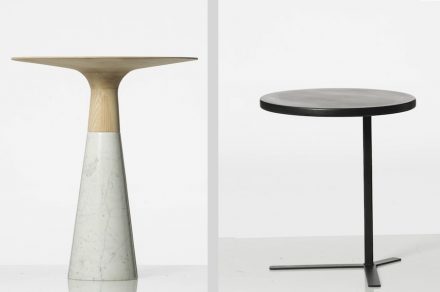 The base of „Luna“ is made of marble, the rest is wood. „Xenia“, too, is available with a natural stone tabletop. Designed by Luca Giacomelli.
Studio Nove 3 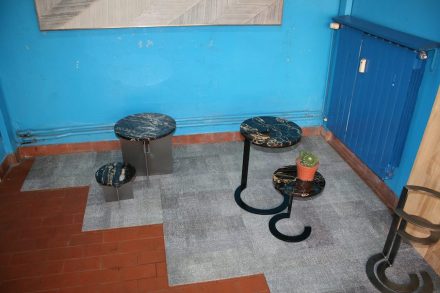 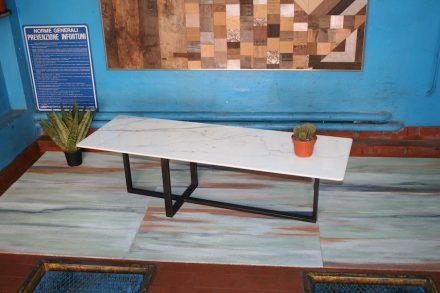 In an auto repair shop cleared for the duration of FuoriSalone young designers from Mito presented their work.
Mito (Mail)

The district of Brera is considered the „Design District“, and rightly so. Well established design companies have rented every available space. 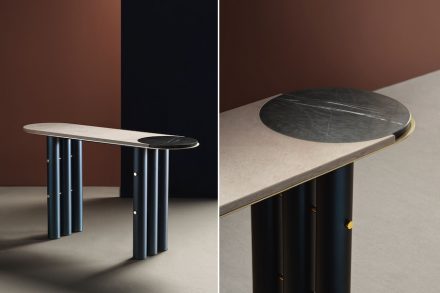 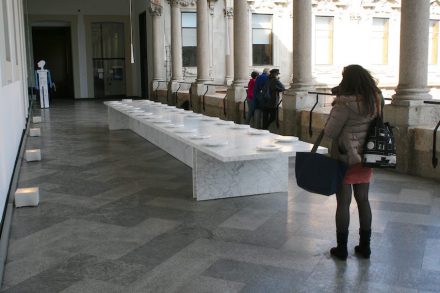 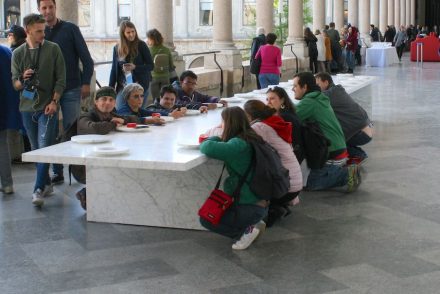 The University of Milan has also established as venue of the FuoriSalone. On its top floor Furrer Company has moved in with its installation „Parla!“: a 10 m long table made of Stutuario Marble (Design: Marcio Kogan of Studio mk27 and Filippo Bricolo). The table was meant as a meeting place for visitors and to facilitate communication.
Furrer 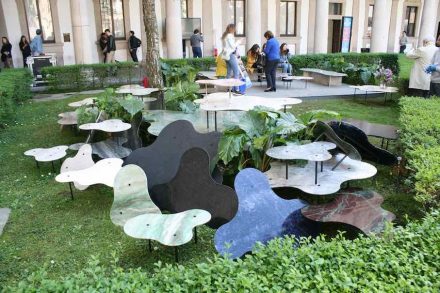 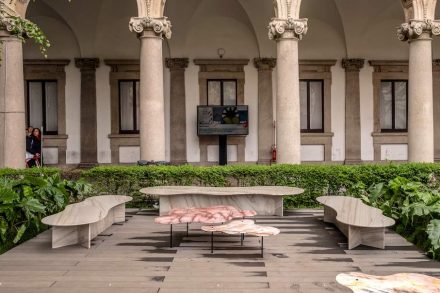 In the University’s inner court Brazil-based Guidoni presented its exotic stones. Vivian Coser of Espírito Santo designed the side tables and seatings after the gardens of landscape designer Roberto Burle Marx.
Guidoni 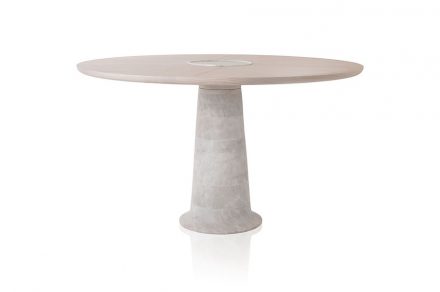 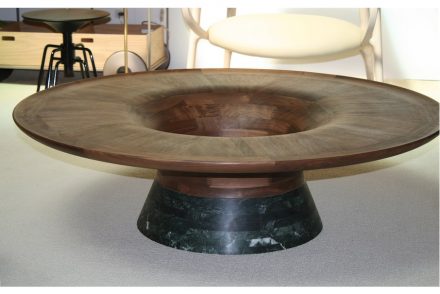 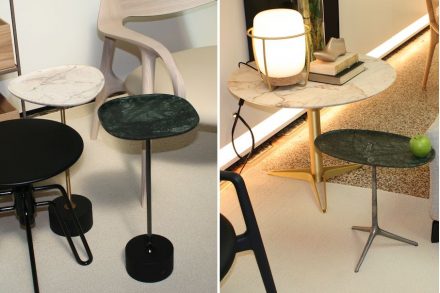 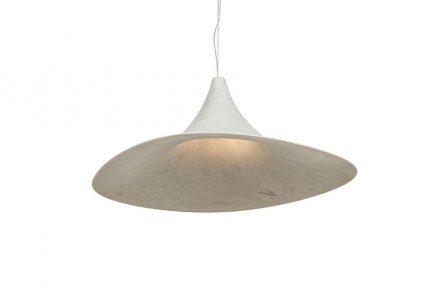 Other Works in/with natural stone in the Palazzo Litta were: Italian designer Emanuel Babled’s hanging lamp „Supernova“ made of Carrara Marble: with a diameter of almost 1 m and 36 cm high it weighs 30 kg.
Emanuel Babled 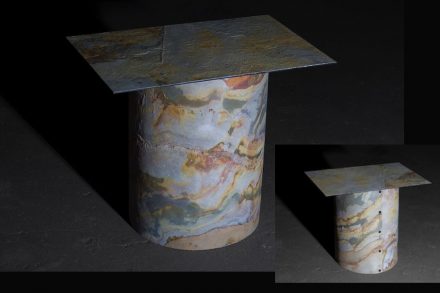 As part of a Swiss joint presentation Bertille Laguet presented his side table „Juratuf“: a metal structure is clad in ultra-thin stone.
Bertille Laguet 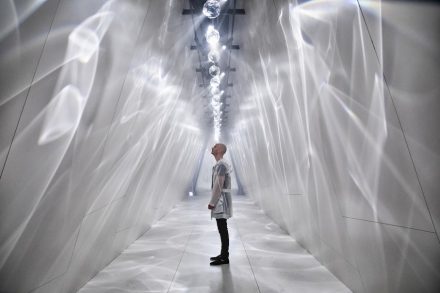