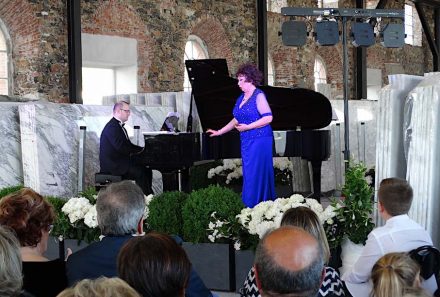 The events go by the name „Marmo all’Opera!“ and make use of historic production sites and prominent venues all around the pole of the white natural stone

„Marble in the Opera! A Melodrama around the natural stone sites“ („Marmo all’Opera! Il melodramma nei luoghi del marmo“) is the name the Carrara Cultural Festival has given this event where famous operatic stars perform at marble sites. The event is taking place for the second time this year as reported in a number of local papers. We discovered it in Consorzio Cosmave’s Versilia Produce Newsletter.

For a change, art is coming to marble whereas usually marble is brought into opera houses to provide the proper ambiance.

Bringing natural stone and art together has a certain tradition, e.g. in quarry concerts.

We had also recently reported on a quarry as an opulent backdrop for a photo-shooting of bridal ware in Cervaiole over the clouds of Carrara.

Marmo all’Opera! Was brought to life by a group of poetry aficionados calling themselves „Amici della Lirica ,A. Mercuriali’“. The seven-part series makes its debut as part of the official cultural program of the city this year and will receive funding in amount of 6,000 €.

The series opened on May 4th with the internationally acclaimed Soprano Giovanna Casolla singing in a defunct marble sawmill built in 1910. Long since decommissioned, the site was recently restored by Marmi Carrara Srl and is now used as a showroom. 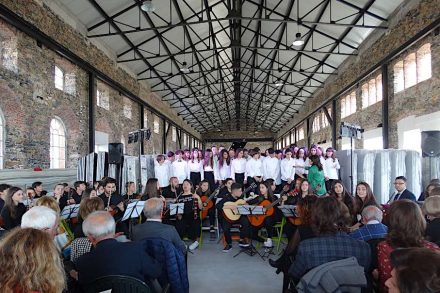 The next operatic event in the series of seven will take place at the Carrara Art Academy on July 06 on the occasion of the 250th anniversary of its founding. Concerts on August 05 at the Piazza del Duomo in Carrara and October 13 in the newly furbished showrooms of Graziani Marmi will follow. The closing concert will take place on November 30 in Teatro degli Animois with Soprano Marialla Devia.

Poetry readings will add to the program and take place on 3 days in June. Two more song events are also planned and have yet to be scheduled.

Tickets cost a mere 15 € per person and event.

Report from the festival 2018 (Italian)