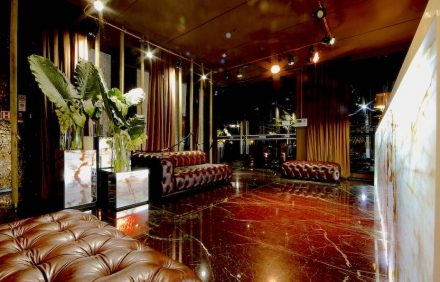 According to the Chinese philosophy of the Five Elements, body and soul can be transformed and aligned by sport and fitness

In Brazil words sometimes have a derogatory connotation by standards in other countries, e.g.: a „motel“ for most people is a hotel designed for motorists. Not so in Brazil, where the term has come to designate accommodation rented out for hourly rates where lovers can retreat discretely. „Academia“ is another term with a distinct Brazilian twist meaning a venue not for training the mind but rather the body. And, since Brazil is the country with the highest rate of plastic surgery, a cult has developed around Studios of this type.

A case in point worth special mention is „Les Cinq Gym“ in São Paulo’s Jardins district. The interior décor is the work of designer Kiko Sobrino realized according to the owner’s concept with ample use of natural stone.

The name alludes to the Asian teachings of the Five Elements to align body and soul. The five elements are wood, earth, water, fire and metal.

Kiko Sobrino has freely interpreted the teachings placing the gym in the center of the complex as a symbol of health and beauty – albeit not as expected. 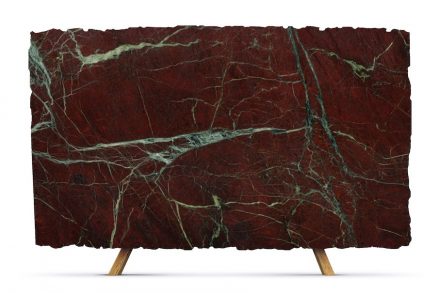 Earth is encountered at the reception in the form of natural stone in the flooring. The stone chosen is the eye-catcher Moulin Rouge Granite quarried locally by Brasigran.

„The red color reflects the typically Brazilian soil“, as Kiko Sobrino wrote us in a mail. 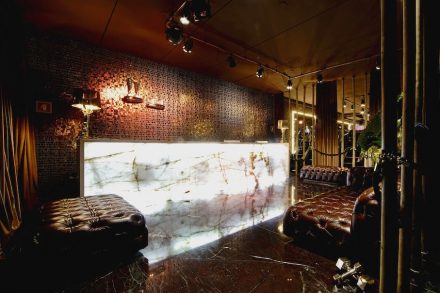 Wood is incorporated in form of Onyx in the reception area. The interior designer sees it extended in „the branches or veins in the floor’s stone structure“.

But there is real wood as well. 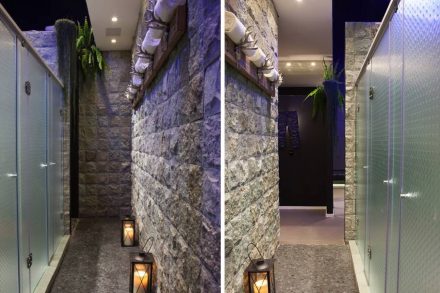 An Acadamia, of course, calls for water in a very practical sense. Brazil’s waterfalls are a great tourist attraction and Kiko Sobrino has symbolically incorporated them by means of raw carved stone on some of the walls.

Les Cinq provides state-of-the-art exercise and fitness equipment as well as the best possible personal trainers by self-acclamation on all three floors but in the style of a luxury hotel in the best area.

A few „tasty morsels“ deserve special attention: the establishment provides spaces with special lighting where visitors can shoot a selfie. Trainers and guests can be contacted via cellphone or tablet.