Artist competition to the communist Ernst Thälmann Memorial in Berlin 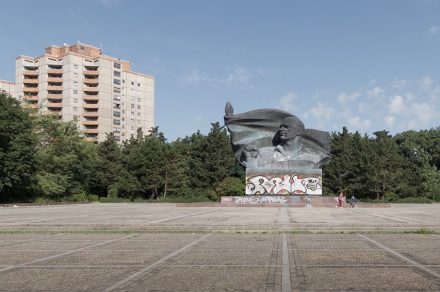 Artists from Germany and also foreign creatives in mixed national groups may apply for the competition for innovative concepts to the Ernst Thälmann Memorial in Berlin-Prenzlauer Berg. The aim is that the ideas „contribute to a revitalization of the place and that the monument and the space around can be experienced within the urban context,” as said in the announcement.

This probably means that the monumental work of art depicting the labor leader and communist politician should be supplemented with a commentary explaining the younger German history. The district intends to use art for this purpose instead of simply placing explanatory posters in the local park.

The bronze sculpture had been created in 1986 by Sowjet sculptor Lew Kerbel on behalf of the GDR-government to celebrate the leader of the communist labor movement in the German Weimar Republic. It is 14 m high and 15 m wide placed on a plinth of Ukrainian granite. Since the end of the GDR in 1989, it is smudged by graffiti.

Typical for its style in communist art is not only the monumentality but also the right-hand fist stretched out as a sign of the communist fighters’ association (Rotkämpferbund) and the stylized workers flag behind.

A total of 180,000 € is available for the realization of the innovative artist concept.

Only professional artists resident or working in Germany are admitted. But if the entry comes from a group only at least half of the members must comply with this specification.

In the first stage, the applicants shall present a sketch of ideas with conceptual considerations. Out of these entries, 10 are selected who, in the second stage of the process, design the realization of their ideas. For this, they will receive an expense allowance of 2,500 € each. Participants in the first stage receive no fee.

The total of 180,000 € includes the before named prize money and the expense allowances plus all the costs for the realization of the winner’s idea.

Application is open until September 26, 2019, at the internet platform Wettbewerbe Aktuell (German).