Finds in the Qesem Cave near Tel Aviv show that people 400,000 years ago had a sophisticated toolkit

The site of Qesem Cave, located just outside Tel Aviv, was discovered during a road construction project in 2000. It has since offered up countless insights into life in the region.

In recent years, archaeologists working in caves in Spain and North Africa and digs in Italy or Israel have unearthed evidence that prehistoric people recycled objects they used in daily life. Just as we recycle materials such as paper and plastic to manufacture new items today, early hominids collected discarded or broken tools made of flint to create new utensils for specific purposes.

Exceptional conditions in the Qesem Cave allowed for the immaculate preservation of the materials, including micro residue on the surface of the flint tools. 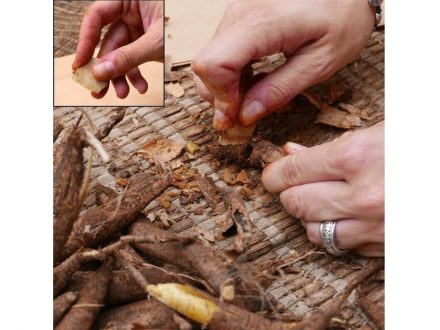 „We used microscopic and chemical analyses to discover that these small and sharp recycled tools were specifically produced to process animal resources like meat, hide, fat and bones,“ Venditti explains.

The meticulous analysis allowed the scientists to demonstrate that the small recycled flakes were used in tandem with other types of utensils. They, therefore, constituted a larger, more diversified tool kit in which each tool was designed for specific objectives.

„Our data shows that lithic recycling at Qesem Cave was not occasional and not provoked by the scarcity of flint,“ Venditti concludes. „On the contrary, it was a conscious behavior which allowed early humans to quickly obtain tiny sharp tools to be used in tasks where precision and accuracy were essential.“

„This research highlights two debated topics in the field of Paleolithic archaeology: the meaning of recycling and the functional role of small tools,“ Prof. Barkai observes.

The study was published in the Journal of Human Evolution.