„One Million Grams of Granite“: Austrian stonemasons busy themselves with artistic inspiration for one ton of local stone 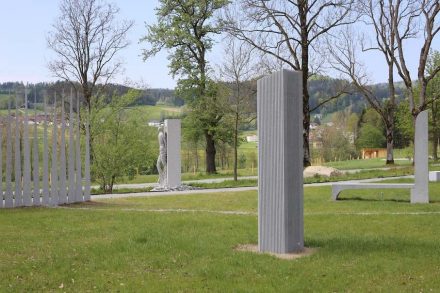 „Eine Million Gramm Granit“ („One Million Grams of Granite“) was the title of the challenge for stonemasons all across Austria to be presented at the Upper Austrian Landscape and Gardening Show in Aigen-Schlägel. The unusual title – one could have called it „One Ton of Granite“ – was conceived to inspire the 12 participating craftsmen and enterprises to create something out of the ordinary with a one-ton block of stone.

The idea was to appreciate and value every single gram of the material, which, after all, took millions of years for nature to create. Waste was to be reduced as close to zero as possible.

The concept and artistic accompaniment originated with Arnold Reinthaler, Viennese master stonemason and sculptor with a doctoral degree. He is renowned for his in-depth knowledge of material and affinity to unusual ideas. The project coordination was bestowed upon the Steinzentrum Hallein, an Institute for further education of Austrian stonemasons.

The 12 works were set up along a course on the grounds of Upper Austria’s Landscape and Garden Show. We present the works in the order of appearance on the artistic pathway. 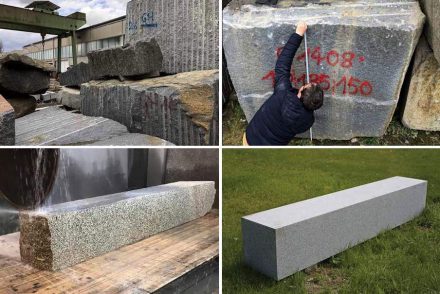 Participants were given identical blocks of stone 40 x 40 x 225 cm in a variety of local granite stone types. Stonemasons paid for the block out of their own pocket. 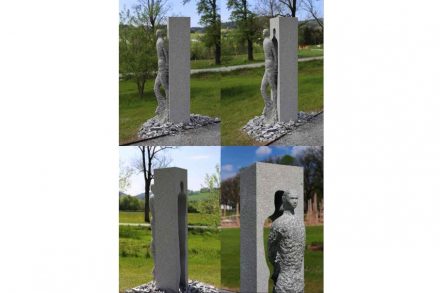 „The First Step“ was the title sculptor Walter Baumann (in cooperation with Poschacher Natursteinwerke) gave his work depicting an arrow-pierced human figure. Waste was averted by incorporating a simultaneous positive and negative figure. The „Step“ in question invites visitors to open their mind to the works. 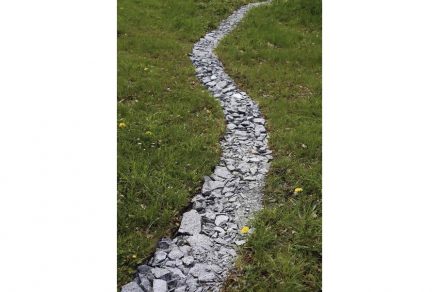 Master stonemason Erich Trummer took the theme literally and broke the cube into small pieces which he placed as a „Stone Thread“ like breadcrumbs along the exhibit area. Each piece, is, of course, unique – a tongue-in-cheek attack on the marketing strategy of the stone branch. 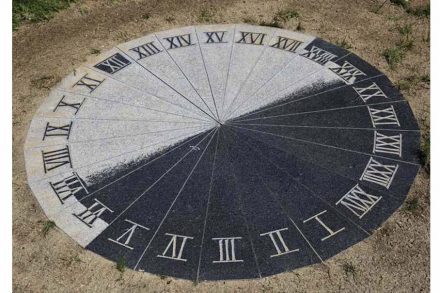 Helmut Moser cut up the original block into 24 segments and reassembled them to a 2.2 m diameter disk. But the face of the clock was deprived of the hands – symbolically alluding to the timelessness of stone. The surfaces of the pieces depict various phases of day and night. 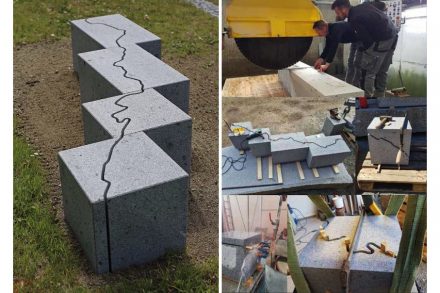 Thomas Pisl seized the opportunity to depict Austria’s geology, i.e. as a Granite and Gneiss Plateau in its northern section. He partitioned the block into a scale model of four segments along the river. 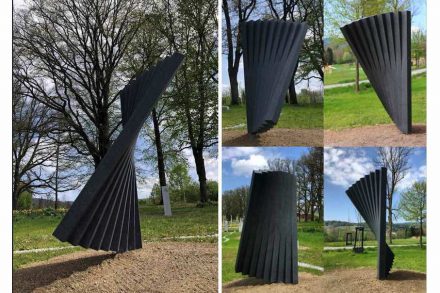 With four precise cuts along the length of the block, Bernhard Baumgartner created 9 even segments like a tic-tac-toe game. He connected them and shifted them slightly creating a sort of Flying Fan – thus the title „Fliegender Fächer“. As though the stone has wings and could take off at the slightest breeze. 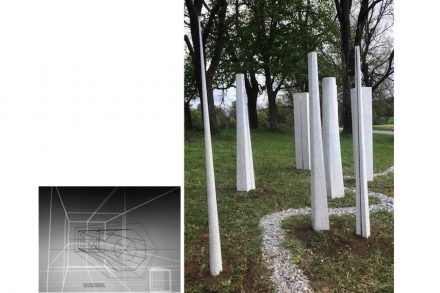 „Multiplication of the stone” was the title Norbert Kienesberger gave his work: a diamond wire cut several pieces longitudinally from the orginal block. This resulted in rods with different shapes, with one rod emerging from the other. It is difficult to believe how much volume could be gained from the starting block. 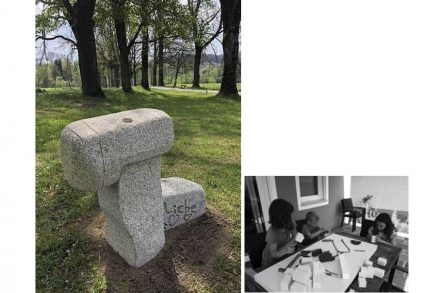 „Kinderskulptur“ („Children’s‘ Sculpture“) is the name Raimund Fuchs gave his work – „his“ work?… He had passed the task on to his three children aged 6, 8 and 10 respectively giving each an equally large piece of the block to work. His work then was no more than a transposition of their models to the stone. This he did with „passion and perfection“ just as his children had created their models, according to the catalogue. 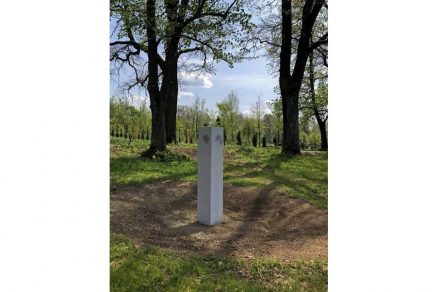 The work of Ernestine Lehrer is radically different. Whereas the men had all dismantled the stone block, she merely scratched the surface and engraved a pun, which, in the end, made up the words: „Das Bin Ich“ (that’s me). Of the million grams she removed but a few. The stone is installed slightly below level surface as if it were sinking into the earth. 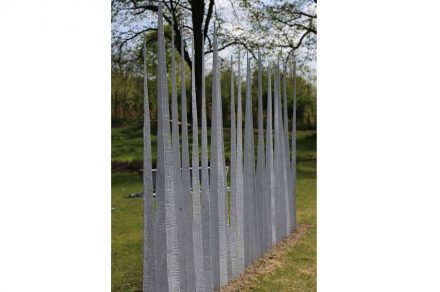 For his work „Hier beginnt das Paradies“ („Where Paradise Begins“) Hans Paar cut the cube into triangular prisms using an angle grinder. He thus created a type of picket-fence 4 m in length. Beholders may reflect on which side of the fence Paradise may lie? Have I arrived? Could I be injured by the pointy fence pickets on my way there? 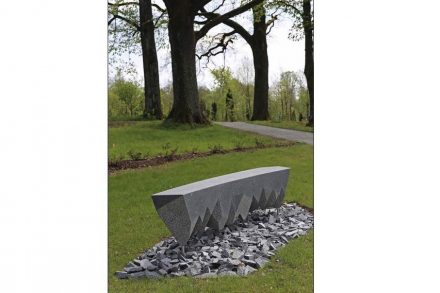 Eva Holl’s „Der Gespiegelte Berg“ (mirror image of mountain range) renders an on-scale image of the Gosaukamm – upside down, the cut away pieces were strewn around the foot of the mountain – as a mirror image of a mountain reflected in a clear lake. Strasser Company participated. 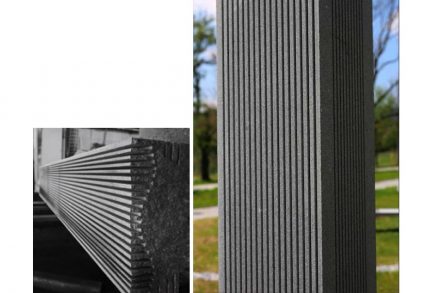 With his work „Schlag für Schlag“ Wolfgang Gollner invited visitors to experience hand-on sculpting: he made incisions on all four sides of the block. If a visitor then hit the stone with a hammer (provided) the narrow piece would chip away the stone, gradually leaving the final shape. 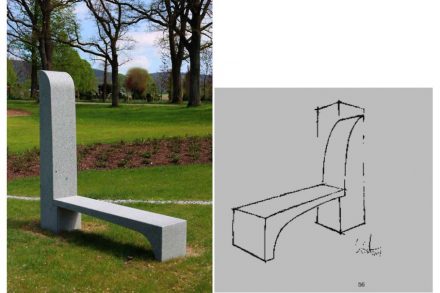 A single cut with the diamond saw was all Rudi Winterroither needed – unbeatable in terms of energy and material efficiency! He called it „Diogenes-Bank“ (Diogenes‘ Bench). 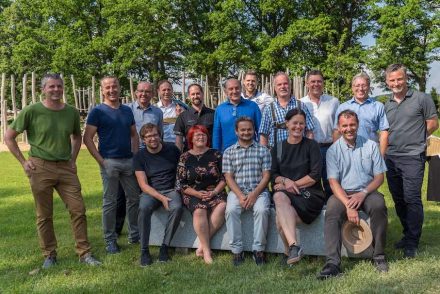 Note that the project also shows the limits of minimizing waste: With every cut of the saw, waste ensues, i.e. in form of stone meal as broad as the cut. This seems unavoidable but also opens possibilities for creative ideas in using that waste.