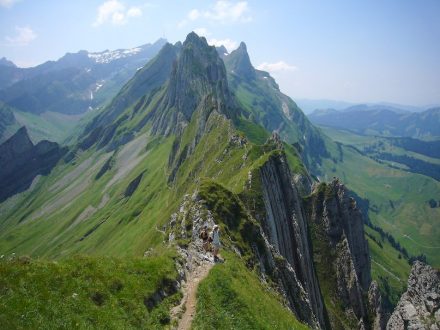 Only a small path with precipices of several 100 m on both sides leads to the Altenalp Türm summit in the Swiss Alps. Behind in the distance with a big antenna can be seen the Säntis.

The three finalists to run for the Natural Stone Category of the Archmarathon awards will be selected during Marmomac (September 25-28, 2019) out of 42 studios from all over the world. Architect can earn credits in participating in the presentations.

Architectural Record magazine has released the 2019 edition of its annual list of the Top 300 Architecture Firms in the United States.

The 52 km long marble hiking trail „Le sentier du Marbre“ brings tourists to many quarries around the village of Caunes-Minervois in the Département Aude in the South of France.

„England’s Creative Coast“ is the name of a 3-year-initiative highlighting art along the 1400 km coast at the English Channel. One attraction is the first art GeoTour digital trail using GPS to find „new world-class cultural experiences, both physically and digitally“.

The Dry Stone Wall Association of Ireland has a set of postcards depicting some examples for such masonry work. Pack of 5 cards 6 € international shipping included.

Dry Stone Walling is the topic of a seminar in Dijon in France (September 12 and 13, 2019, in French) organized by the Fédération française des professionnels de la pierre sèche (FFPPS) (French 1, 2).

The Museum of Earth and Science in the Swiss Martigny Région offers permanent exhibitions which show the geological world of the Vallis. On the lower-level, a mine gallery has been reconstituted to a state like it used to be in the past. 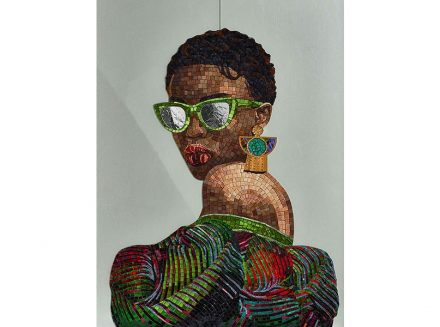 Italian Mosaic company Sicis launched its new collection of portraits of colored women called „Shades“. In each art piece, sunglasses are a central element. Natural stone was not used.

Arches National Park in southeastern Utah with famous sandstone bridges has been added to the list of Dark Sky Parks. Touristic sites with this certification may use only fully shielded lamps to preserve dark night skies and educate the public about the importance of this topic.

Some of the largest meteorites known on Earth are on offer at an auction in Dallas, Texas on July 20, 2019. Among them is a set of pistols made form the Muonionalusta Meteorite, which came down at today’s Sweden probably about a million years ago and was discovered in 1906. Heritage Auction firm also has works in gold are also on offer.

The Guardian reported about the „pencil towers“ in Manhattan, a new generation of skyscrapers small like needles. Is that a new market to invest in or only a speculation bluff? Complaints say that these buildings shadow Central Park’s lawns.

Video of the month: Wild capuchin monkeys in Serra da Capivara in Brazil use stones to crack nuts. And more: They have been doing this for at least 3,000 years, and their technology has changed over time, archaeologists have found (video, 1).