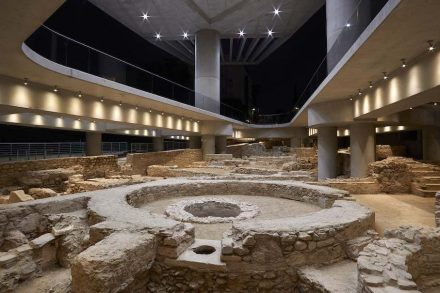 An ancient Athenean neighborhood with remnants of streets, residences, baths, workshops, and tombs from the 4th century BC until the 12th century AD was opened as part of the Acropolis Museum in Athens.

At Marmomac (September 25-28, 2019), Italian Pibamarmi company will show „Sound of Marbles“ by Japanese architect Tsuyoshi Tane. The installation is about the interaction between marble, sound, and light.

Polish webpage Marbley One has little items made of marble for everyday usage.

Antipodes Map is a webpage where one can identify the antipode on the other side of the globe. But as 71% of our planet’s surface is covered by oceans there is a good chance to end up in the water.

Brazil’s state of Espírito Santo has an online-award for leading entrepreneurs organized by Folha newspaper. In this year, the first prize went to Rafael Guidoni from Guidoni Granitos, the second to Camilo Cola from Marbrasa and the third do Tales Machado from MagBan (Portuguese).

At its meeting in Baku (Azerbaijan) in July 2019, the World Heritage Committee inscribed 29 new sites in Unesco’s list.

Plate tectonics and the „recycling“ of material of the Earth’s crust is much older than previously thought and started about 3.3 billion years ago, an international team of scientists writes in „Nature“ magazine (571). Our planet is estimated to be 4.5 billion years old.

Video of the month: Woods Davy is a Californian sculptor who creates stone structures like mobiles where the boulders seem to float in the air (1, 2).