Nature in the quarry: the Eurasian Eagle-Owl (Budo budo) feel undisturbed by all the noise of heavy machinery in the quarry 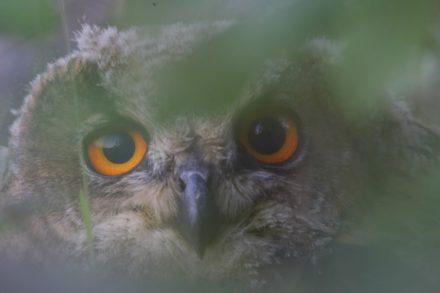 Oetelshofen Limestone Quarry, Germany, regards the endangered giant owl, which chose the quarry as its home, as „a popular figure“

„We are a sort of small zoo, which also carries out detonations on occasion“ jokes Jörg Iseke. He is the managing director of H. Oetelshofen Limestone Quarries near Wuppertal in the Ruhr Region. Here 1.5 million t of limestone are mined each year. But the quarry is also popular for its Eurasian Eagle-Owl conservation project.

For those unfamiliar with ornithology, the Eurasian Eagle-Owl (Budo budo) is the world’s largest owl. For many years conservationists feared it would become extinct. 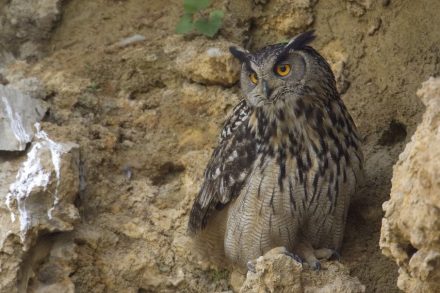 Surprisingly, the majestic bird likes to nest not only in abandoned quarries but also in functioning mines such as Oetelshofen. It is seemingly undisturbed by the heavy machinery rolling by or even by detonations when the rock face is cracked.

Iseke laughs and tells another story tongue-in-cheek: „Our adult owls have learned that every detonation is preceded by the sounding of a siren. When they hear the signal they go into hiding for a while until the detonation is over.“

The owl project was brought to life by Oetelshofen Company in 2007. It includes scientific study of flora and fauna in the quarry. The findings have turned zoological beliefs topsy-turvy. Whereas it was a firm belief that the endangered birds were extremely shy, we now know that they can adapt.

I.e. they set up nesting grounds near areas populated by man and adapt their habits. Jörg Iseke: „We know that some owls use the beams of the Wuppertal Suspension Railway as vantage points from where they can observe and hunt rats.“

Another important discovery was that promotion of one endangered species need occur to the detriment of another. Iseke’s owls, e.g. steer clear of hare, another endangered species, and usually favored booty. In the quarry, they prefer to hunt large rodents and pigeons.

The ecological symbiosis is complex.

Similarly surprising findings hold true for other endangered species such as the Little Ringed Plover (Charadrius dubius). They like to nest on heaps of rubble. „When nesting time comes, we steer clear of these areas and give them space to rear their young“, Iseke explains as the only consequence for the quarry’s production.

Tying the many different aspects together to a unified package requires two things: knowledge of the animals’ habits – reason why Oetelshofen ensures that staff is informed of nesting times. 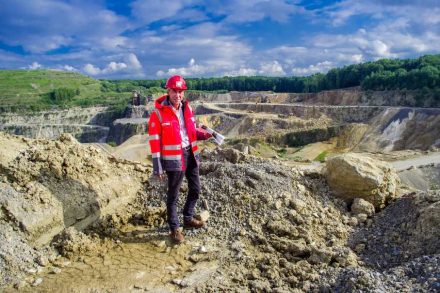 And an admission of boundaries which, despite all the good-will extended to conservation in the quarry, must be drawn somewhere. Iseke says, again with tongue-in-cheek, „despite our providing puddles, the danger for an individual toad in our quarry is probably greater than it would be in a swamp in the wild.“ What he means is that despite special paths provided as toad-crossings once in awhile an amphibian will be caught under the wheel during migrations. On a whole, the wildlife population profits from the refuge despite the activities in the quarry.

But where does the information regarding animal life in Oetelshofen come from?

Jörg Iseke is, by his own account, a wild-life conservationist with a foible for fauna and wild orchids in the quarry.

But the official requirements convey much knowledge of the eco-systems: The quarry is responsible for yearly monitoring of animals and plants on the company site. The job is done by specialists and costs the Oetelshofen Company some 30,000 – 40,000 € each year. 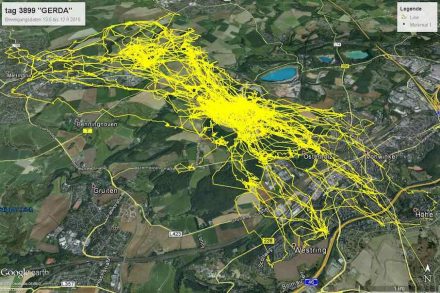 Along with taking inventory, the experts also compile a catalogue of measures for the protection of the endangered species. With this, Oetelshofen Company obtains the needed instructions.

„Officials apply considerable pressure, so we are forced to learn in order to comply“, Iseke admits but there is no bitterness in his voice. On the contrary: he profits of the theme to promote public relations. 30 years ago, we would have uprooted any rare plant in the quarry immediately to avoid conservationists altogether. Today there is „mutual trust and cooperation“ between officials, private individuals and enterprises.

„Our owls have become popular figures in our landscape“, Iseke sums up.

This is how it works in practice: Oetelshofen knows of the nesting places of the owls because the nature specialist followed their flight path with night-sighting binoculars. But what if the next is too close to the core zone of the quarry…? 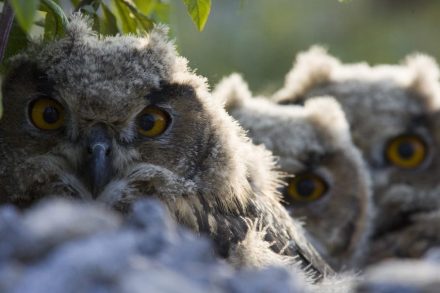 … „Then the animals must be told“, he says calmly. „We make a bit of noise and the couple finds a new place to build its nest“. 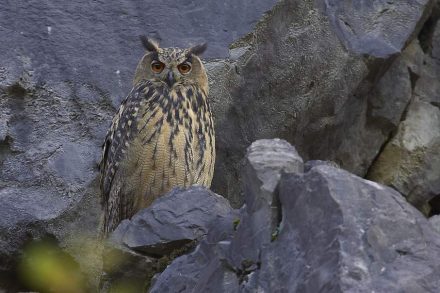 In short: „There’s nothing to it.“

Cooperation of the staff members is also uncomplicated. They are nature-lovers themselves for one thing, and for another protecting the owls also protects their workplace.

To further promote public relations, the Trade Organization of the German Limestone Industry is compiling a databank of active and dormant quarries.