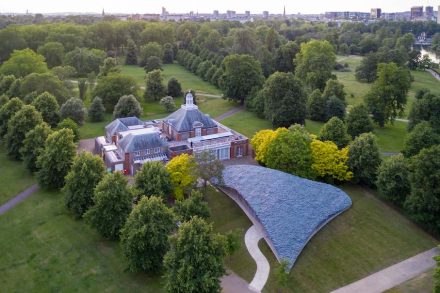 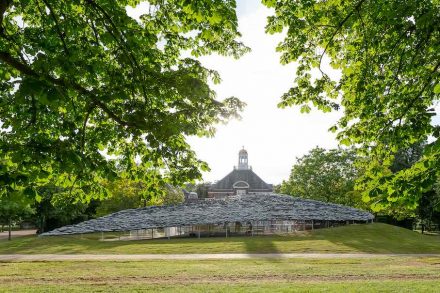 From a distance, this year’s Serpentine Pavilion is reminiscent of an area of slate waste as one might encounter in quarries e.g. in Wales. Every year London’s Serpentine Galleries in Hyde Park invite a promising young architect to exhibit an installation behind the Galleries. Visitors can view the work until October 6th free of charge. This year the honors fell upon Japanese Architect Junya Ishigami.

But unlike slate quarry waste, the pavilion is, in fact, a canopy. Visitors can walk under it and get the feeling of walking in a cavern. Ishigami is known for his shapes leaning heavily but playfully on landscape elements and the architectural heritage. 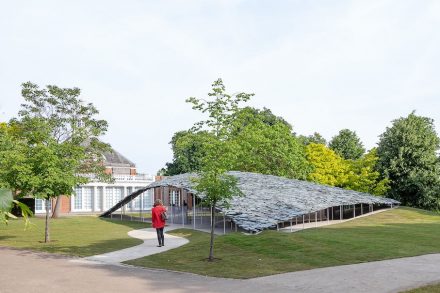 His „free forms“ are meant to create a harmony between humanity and nature, he is cited.

For his Pavilion, Ishigami used 61 t of raw slate originating from the Honister Mine in Keswick, Cumbria. This quarry has been actively mining slate since 1728 as one of the last remaining slate quarries of England. 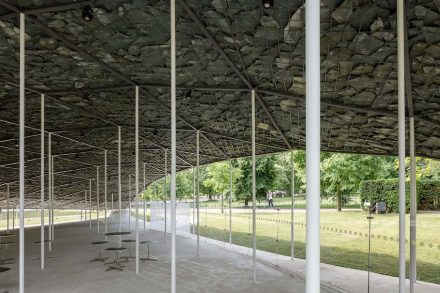 The slate is laid out on a simple iron mesh which, in turn, is supported by 106 pilons. Despite the lightness of appearance, Ishigami’s plan to evoke the impression of a flying carpet falls short of the mark.

This may be due to the harsh reality of official requirements, or so the view of critics in the daily newspaper The Guardian: additional supports were required as well as a disturbing plexiglass wall.

Beneath the 30 m-long slate canopy covering a surface of 350 m² is a café. One critic unflatteringly wrote: „The natural materials create a murky wave of stone housing a coffee bar with amebic chairs and tables.“

Since the turn of the century one architect is invited each year by the renowned Serpentine Galleries in Kensington Gardens’ Hide Park, London to draft an installation for the Pavilion. The lucky contender has six months to develop an idea and find the needed funding. There is no budget granted. The project can be financed through sponsors, and the sale of the Pavilion after the exhibit.

Ishigami was the 19th architect chosen for this noteworthy task. He followed in the footstepsof Zaha Hadid, the first to be honored, and then Mexico’s Frida Escobedo, Burkina Faso’s Francis Kérén, and Bjarke Ingels of Denmark, all of whom received much praise for their work. In fact, Ingels’ work in 2016 „was the most visited architectural and design exhibition in the world,“ according to the Galleries. 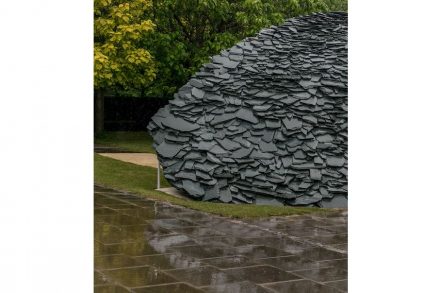 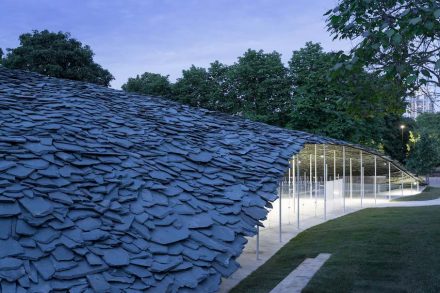