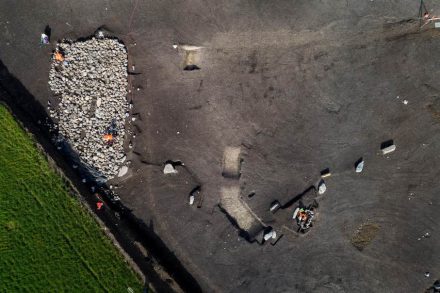 A long time ago, the stones had been knocked down maybe to make them invisible in the landscape

About 30 aligned menhirs have been excavated by a group of French scientists at Veyre-Monton in the Massif Central (département Puy-de-Dôme). The archaeologists come from the French National Institute for Preventive Archaeological Research (Inrap) and their work was conducted in the context of a widening the A75 motorway.

The scientist report on the webpage in English: „The monoliths are from 1 to 1.6 m tall and form a more or less straight and continuous alignment, extending along 150 m in the excavation zone and probably beyond. They are bordered by another alignment of large stones, in the continuation of which five stones are arranged in a horseshoe shape…

„Clearly visible in the landscape, the largest alignment shows an astonishing perspective: the larges menhirs are mainly at the top of a slope to the north, while the smallest ones are to the south and spaced closer to each other. This alignment follows a north-south axis in immediate proximity to a mountain pass.“ 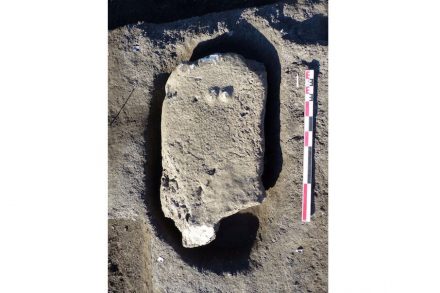 One of the menhirs may depict a human statue: It has a „rounded protrusion extending from the crudely sculpted shoulders, as well as two small breasts… Around fifty centimeters under the breasts, symmetrical removals, very eroded but forming an engraved chevron, may correspond to forearms placed on the abdomen“.

Such anthropomorphic menhirs are rare in France and had been mainly found only in the Mediterranean region. The one now excavated in Veyre-Monton has strong similarities with statue-menhirs in Brittany and Switzerland. 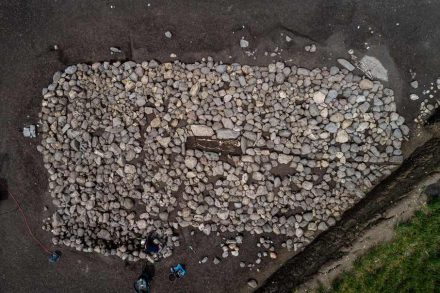 Found was also a quadrangular cairn, 14 m long and 6.5 m wide, constructed around a tomb containing the mortal remains of a tall man.

„As with some other monuments, such as Belz in the Morbihan, the Veyre-Monton menhirs were knocked down to make them invisible in the landscape. Pushed into large pits, sometimes mutilated or covered with dirt, these monoliths were the object of iconoclastic actions, a sort of condemnation perhaps linked to a change in the community or beliefs. While this group of structures most resembles the large Armorican megalithic monuments, such as Carnac, it is part of a dense distribution of megalithic expressions present throughout western Europe.“