„Percorsi d’Arte”: research and development on the artistic object made of natural stone 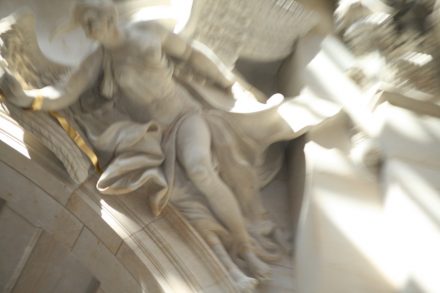 The naturality of stone is this year’s main theme of the Italian Stone Theatre in Marmomac’s Hall 1. We draw particular attention to the presentation „Percorsi d’Arte“ (Ways of Art), curated by Raffaello Galiotto for the second time: 5 internationally known artists do not show just art, but research and development on the artistic object made of stone, so to speak.

Galiotto’s basic idea is that with CNC machines and the diamond wire, new tools are available to sculptors, and they should use them. The technology „is part of the language of our time,“ he says in a talk with Stone-Ideas.com. At the same time, he emphasizes that the artists have to develop „a new respect“ for the material which is millions of years and, among other things, the should avoid or at least reduce waste.

In „Percorsi d’Arte” the participants have explored where the new tools can take sculpting.

We present the works in the same order as in the press release of the fair: 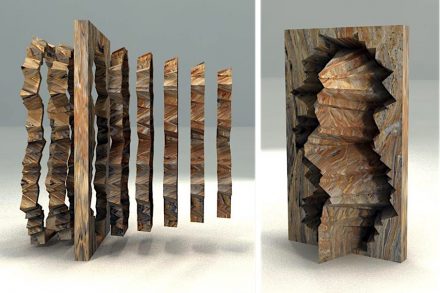 In „Diapason”, Nicolas Bertoux symbolically creates a new mountain out of a stone slab: with the diamond wire, he cuts several silhouettes out of the material, and then turns them several times and puts them together again. From the cavity, he has carved into the stone now comes out a new mountain. The Italian marble Arabescato Orobico was used.
Production: Cms; Stone supplier: Cave Gamba 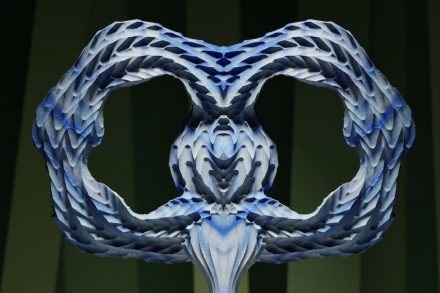 Industrial designer Raffaello Galiotto deals with the veins being a peculiarity of some types of stone in an unusual way: in „Symmetric” he first created 3 examples of book-matches – which brings the naturally random course of the veins into a man-made symmetry. Then he picked up the technology and worked the surface, largely blurring the previous structure. Symmetry, on the other hand, is also a principle of nature, to be found, for example, in the human face.
Production: Emmedue; Software: DDX; Surface Treatment: Fila Industria Chimica; Stone supplier: Essegra International; Tools: Nicolai Diamond 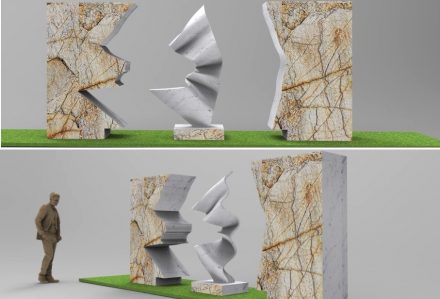 Sylvestre Gauvrit admonishes the visitor „Do not stop at the surface, dig deep to find the soul”. For this, he cuts a contour from a block, and the block keeps showing the sidelines of the cut. However, the contour is twisted in itself, figuratively perhaps like a curtain in the wind.
Production: Tyrolit Vincent 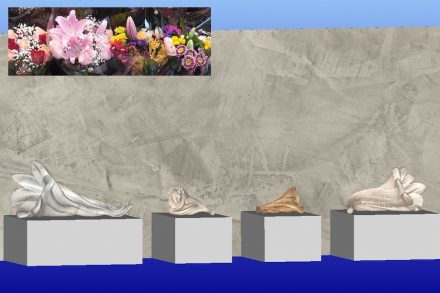 Jon Isherwood had been at the florist’s and with this inspiration, he turnes nature upside down: in „Flourish” he recreates in stone the finest that the plant world has to offer, namely the flowers. In a sense, this is petrification, made possible by modern technology. „I want to reveal the beauty of stone through a blossoming of the marble,” is said in the press release.
Production: Garfagnana Innovazione 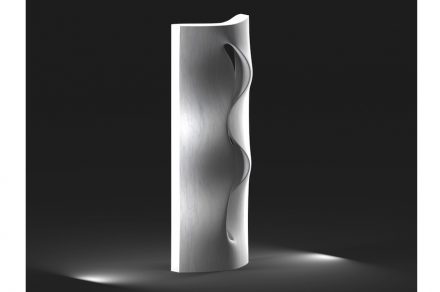 In „Wave’s Passage”, Cynthia Saw let a kind of wave flow through the stone, making a few turns back and forth. „The traces of carving by machine can accentuate the flow of the form”, she notes.
Production: Denver, Software: Taglio. 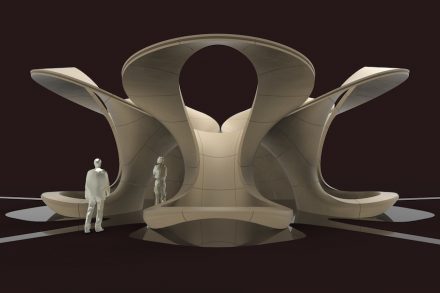 In addition to „Persorsi d’Arte”, we also point out the work of Giuseppe Fallacara in the context of „Lithic Garden”, also in Hall 1: Together with Zaha Hadid Architecture, the associate professor at Bari Politecnico built a structure using ancient principles of „Stereotomy” in a modern way. The result is vaults that remind the monks’ cells in ancient monasteries. „Klaustrum” is the name of the work. 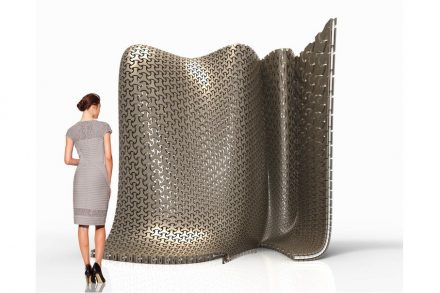 Also by Giuseppe Fallacara in Hall 1: „Lithic Fabric”. Marble tiles are connected by a steel net and can serve as a decorative cover for any building, e.g. like leaves of ivy as sun protection.
Company: CNC Design di Francesco Brunetti