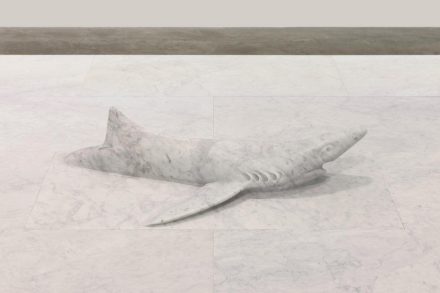 Kerlin Gallery in Dublin, Ireland is presenting „I dreamt I dwelt“, an exhibition of new sculptures by Dorothy Cross, until October 19, 2019.

At the heart of the exhibition, a shark rises up from a floor of Carrara marble as if emerging from the ocean. The serenity of the marble’s surface, almost 5 meters in length and rippled by bluish veins, is interrupted by the ascendant body of this creature, glassy-eyed and frozen in space: we are not sure whether it is living or dead.

The history of the shark, spanning over 420 million years, is longer than that of the stone from which it is carved – and yet it is the creature’s vulnerability, along with that of all marine life, that is captured in this moment. 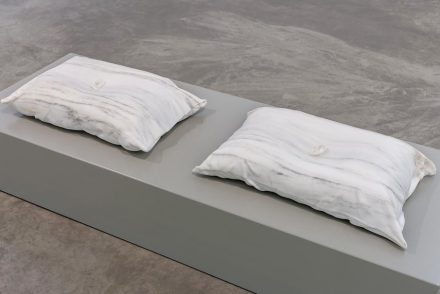 Elsewhere, 2 ears listen out from pillows. Seemingly pliable, the cushions are carved from Greek marble, the kinks of their fabric tapped into stone. A depression marks each surface, as if left by a resting head, and it’s in these imprints – the point of contact with the human body – that two ears are carved: one left, one right. 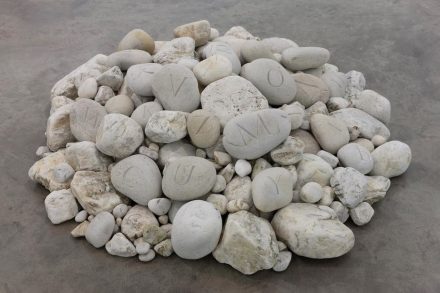 In another work, quartz stones are stacked into a mound. 26 stones are carved with the letters of the Roman alphabet, setting man’s concept and understanding of time, culture and language against the vast backdrop of nature.

„I dreamt I dwelt“ is titled after a popular 19th-century aria, in which the lyrics express the human desire for power, riches and invulnerability: „I dreamt I dwelt in marble halls, with vassals and serfs at my side…”.

Cross sees the body and nature as sites of constant change, creation and destruction. These new works present a powerful distillation of her long-term concern: the complex relationship between the natural world and humankind. Dorothy Cross lives and works in Connemara, Ireland.