Lee Ufan at the Hirshhorn: sculptures of stone and steel corresponding to the museum’s architecture 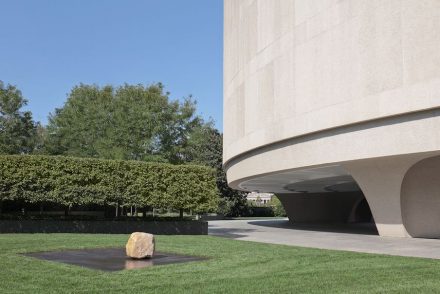 Ten new artworks by the Korean artist are on view through September 13, 2020, at the sculpture garden on the National Mall

Lee Ufan explains his art: „A plain, natural stone, a steel plate — which is a solidified form of components extracted from stone — and existing space are arranged in a simple, organic fashion. Through my planning and the dynamic relationships between these elements, a scene is created in which opposition and acceptance are intertwined.”

„Lee Ufan: Open Dimension“ is the title of an expansive installation, featuring 10 new sculptures from the Korean artist’s signature. It marks his largest single outdoor sculpture project in the US, the first exhibition of his work in the nation’s capital, and the first time in the Hirshhorn’s 45-year history that its 4.3-acre outdoor plaza has been devoted, almost in its entirety, to the work of a single artist.

The Hirshhorn is one of the most visited modern art museums in the U.S located in the heart of Washington, DC, on the National Mall sited exactly halfway between the Washington Monument and the US Capitol. Its building was designed by architect Gordon Bunshaft (1909-1990), a Pritzker Prize-winner, as „a large piece of functional sculpture among the shrine-like structures of the National Mall“, according to the museum’s webpage. 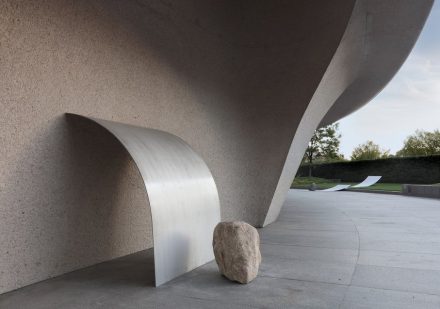 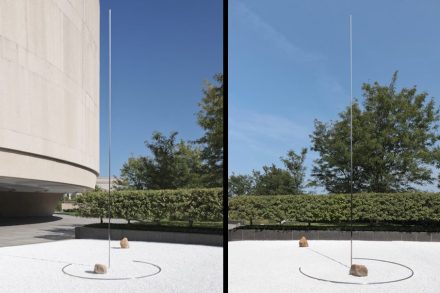 In Lee Ufan’s current exhibition, each sculpture responds to the Museum’s unique cylindrical form and continues his practice of placing contrasting materials, such as stainless steel plates and boulders, in dialogue with each other to heighten awareness of the world, in his words, „exactly as it is.”

Leaving the materials mostly unaltered, Lee arranges them with careful attention to the subtle nuances of the site to foreground the visitor’s encounter with the art as it unfolds in time and space. 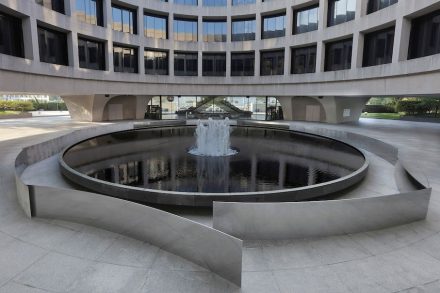 The Hirshhorn’s building amplifies the experience by offering myriad viewpoints from which visitors can contemplate the works.

Lee Ufan is widely renowned as one of the most important artists of the past half-century. Born 1936 in South Korea he lives and works primarily in Japan and France. He is a founder and major proponent of the avant-garde Mono-ha („school of things”) group, which in the 1960s and 1970s became one of Japan’s first internationally renowned contemporary art movements, and his current practice encompasses sculpture, installation, ceramics, painting, and works on paper. In 2010, the Lee Ufan Museum, dedicated to the artist’s oeuvre, opened on the Japanese island of Naoshima. Lee has been the subject of more than 140 solo exhibitions around the world.

„Lee Ufan: Open Dimension“ until September 13, 2020, at the Hirshhorn in Washington, DC. A complementary installation of the artist’s abstract Dialogue paintings is on view in the Museum’s third-floor galleries from to March 2020.