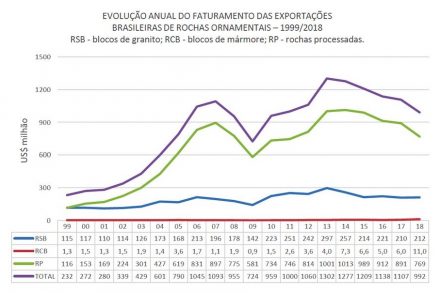 The average price of exported stone rose by +4.1% (to 494.3 $ / t). These are statistics published by the Brazilian stone sector’s umbrella organization Abirochas.

Consultants Kistemann & Chiodi Assessoria e Projetos were responsible for the compilation. Leading analyst Cid Chiodi had already noted improvement for the months of September to December in his annual summary 2018 and cautiously asked if Donald Trump’s austerity measures against China were perhaps having a positive effect on Brazil’s exports.

So, it has come to be. But Chiodi, as usual, was very conservative with his prognosis and expected growth only for the first months of 2019.

Despite massive efforts by Abirochas and the assistance of APEX export supporters the last decade brought no improvement for the structural problems:
∗ Exports are a monoculture where a whopping 60% of exports of half-finished and finished products go to a single country, namely the USA;
∗ Sales of stone abroad are limited to slabs and blocks to a great extent; full-scope delivery for building projects plays a negligible role thus far.

But it was precisely this, which was named as a challenge – the talk was of a „Terceira Onda“ (Third Wave) in which indigenous natural stone types were to make a profit for the country.

The weak building sector in Brazil is part of the stone branch’s current dilemma now on-going for a number of years – unembellished Chiodi sees no improvement on the horizon. 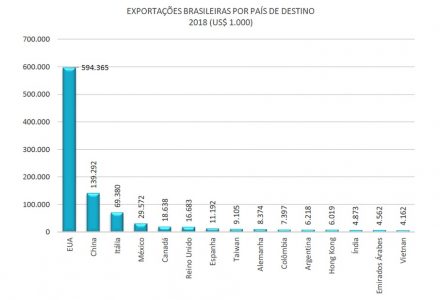 An important positive point of the statistics is that Brazil’s Quartzites are increasingly in demand. In the first trimester of 2019 exports improved by 50% compared to the same period one year prior. The average price per slab was 2000 $/t – considerably more that for Brazil’s standard product, granite slabs (600 $/t). In terms of raw blocks, the price was three times higher than for blocks of granite.

Chiodi had already predicted the coming of the age of Quartzites. His prognosis has been confirmed and he wagers a further glance forward: „As early as 2020 exports of quartzites could equal or even overtake those of granites.“

Brazil’s marble, too, is doing well and achieved a very respectable 1000 $/t in the first trimester of 2109.

And what about the market sector of engineered stone? Here, too, as all around the world, figures were up, not only inland but in exports abroad through Brazilian producers.