The fall of the Berlin Wall 30 years ago: mere concrete and thus of limited durability 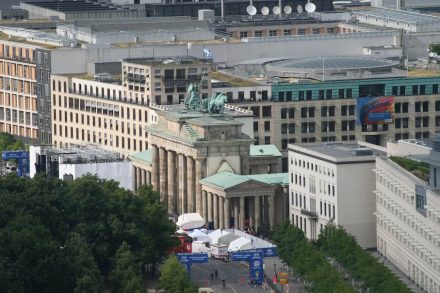 We must admit that whenever we have business to attend on the East Side of Berlin and are using the bicycle as a means of transportation, we invariably travel through the Brandenburg Gate. This has to do with the fact that even after 30 years of a united Berlin we can hardly fathom an open Brandenburg Gate – so we pass through just to make sure that is wasn’t merely a dream.

It’s no exaggeration to define the fall of the Berlin wall on November 09, 1989, as a small miracle, particularly in light of the fact that it came to pass without bloodshed.

Perhaps the breakdown of the „anti-fascist dam“ or „Iron Curtain“ as it was called in East and West respectively – was due to the fact that it was not made of stone but merely of pre-fab concrete elements never made to stand for eternity.

Berlin now has a ribbon of cobblestones meandering through its center where the Wall used to split East and West. The Brandenburg Gate stands proud in its yellowish sandstone and granite plinth to ward off ascending moisture as if it never had to endure the decades wrapped in a gray veil of socialism. 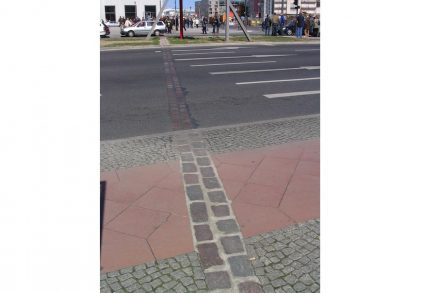 As far as natural stone is concerned, the GDR hardly left a mark. But as late as the 1960’s and 1970’s private quarries were still active and were only later assimilated into the State-owned entities. Natural stone was implemented mostly in cemeteries.

Geology had an important scientific faculty in the so-called Workers’ and Farmer’s State of the GDR where the regime’s goal was driven by exploitation of resources to enable independence from foreign „capitalist states“ (GDR-Speak).
Geologically speaking, the former East German State is now one of the best researched regions of Europe today.

No different from many other countries, the GDR kept the fruit of their research confidential and under lock and key. In later years the secrecy became an absurdity: publications by scientific institutes were reduced to excursions for interested citizens.

After the fall of the GDR, the scientific landscape of the former State was reorganized it was feared that the valuable but unpublished findings would be lost. The findings were kept like treasures in the underground but found little popular resonance elsewhere.

Professor Johannes H. Schroeder of Berlin’s Technical University made it to his mission to bring geologists from East and West together. For his efforts he was later honored with the Federal Cross of Merit (Bundesverdienstkreuz). 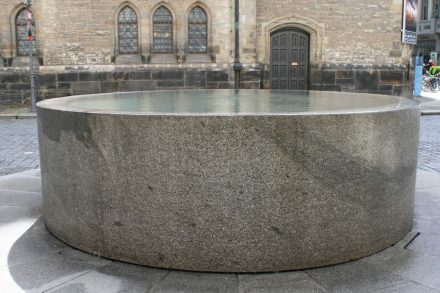 E.G. the „Fountain of Unity“ by David Chipperfield erected in Leipzig: filled to the brim with water, it symbolizes how a single drop can bring on a watershed. 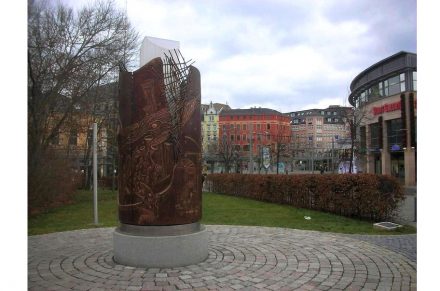 Plauen’s monument dedicated to the reunification is another case in point: standing on a plinth of granite in the middle of a cobblestone circle. It resembles a candle and symbolizes the fear of the population that the turn of events ahead could be less than peaceful.

In fact, it was in this tiny city in Saxony that citizens dared to raise their voices against in protest against the regime of the GDR: On October 7th 1989, when the State Assembly was celebrating its 40th anniversary, an estimated quarter of the population of Plauen marched and demanded change. They continued their protests for over 5 months, hardly noticed beyond the borders of the province.

Famous and well known were the Monday marches in Leipzig and later in other cities.

We remember a Monday evening in the city of Halle where we had visited friends travelling on a visitors’ visa: in silence and in the November darkness, people marched along the Ringstrasse; there was no street lighting except on main thoroughfares and the side streets were eerily dark and somber.

Instinctively one pulled one’s head down between the shoulders in the drizzle. The GDR was uncompromising in its measures to quash protests, so it was highly unlikely that the protests would end peacefully.

Mödlareuth was dubbed „Little Berlin“ as one part of the village was located in Bavaria (Western Germany) and the other in Thuringia (Eastern Germany). The Deutsch-Deutsches Museum tells the story (German).