When parts of today’s Sahara were underwater, giant fish and long-snouted crocodilians lived there 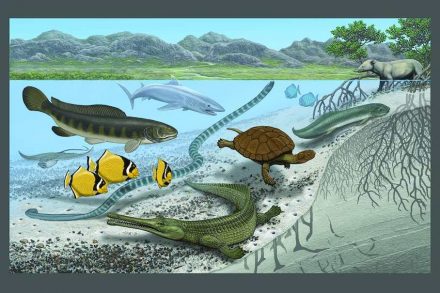 50 to 100 million years ago, large parts of the region now holding the Sahara Desert were underwater, in striking contrast to the present-day arid environment. This dramatic climate change over time is recorded in the rock and fossil record of West Africa. The finds from 20 years of research by a diverse scientific team are published in the Bulletin of the American Museum of Natural History.

At that time, today’s West Africa was bisected by ashallow saltwater with a total surface of 3000 km2 and approximately 50 m depth which had poured from North to South onto the continental crust during an era of high global sea level. Maureen O’Leary, Professor of Anatomical Sciences at the Renaissance School of Medicine at Stony Brook University, had led three excavations to rock exposures in the Sahara Desert in Mali where the scientist found surprising traces of lost species: „Fossils found on the expeditions indicate that the sea supported some of the largest sea snakes and catfish that ever lived, extinct fishes that were giants compared to their modern-day relatives, mollusk-crushing fishes, tropical invertebrates, long-snouted crocodilians, early mammals and mangrove forests,“ explained Professor O’Leary, who is also a Research Associate in the Division of Paleontology at the American Museum of Natural History.

„Because the seaway changed in size and geography frequently, we propose that it may have resulted in ,islands of water’ that stimulated species gigantism.“

Island gigantism is a phenomenon documented e.g. from New Zealand where once the Moa birds lived. They could grow much bigger than their relatives on the mainland probably due to the absence of predators. 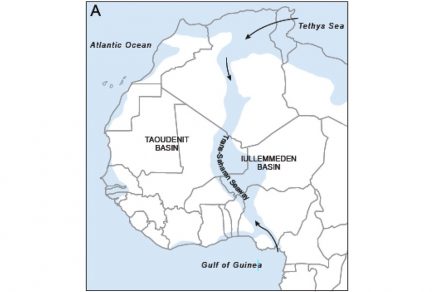 But the fossils from Mali do also prove that climatic change on Earth may reach dimensions unimaginable today. In the Late Cretaceous, the time under study, sea level was 300 m higher than today. For the time being, scientists currently predict that global warming will result in the sea rising 2 m by the end of the 21st century.

The expeditions spanning 20 years involved Professor O’Leary and a collaborative research team of paleontologists and geologists from the United States, Australia, and Mali.

„Few paleontologists had worked the region, given its remoteness and scorching 125 degree F temperatures (more than 50 degrees Celsius). The shifting sand dunes made it difficult to find rocky outcrops, and worse still, a flash rainstorm flooded the roadways making navigation nearly impossible,“ said Leif Tapanila, Ph.D., Professor of Geosciences at Idaho State University and a co-author of the paper.

„These expeditions could not have succeeded without the experience of local Malian drivers and guides.“

Bulletin of the American Museum of Natural History