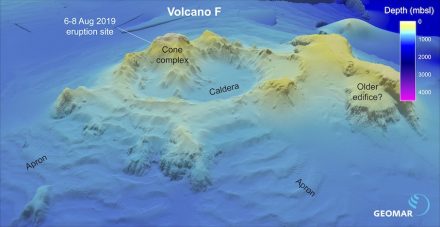 Since August 2019 a giant accumulation of pumice has been drifting in the Southwest Pacific towards Australia. Researchers at the German Geomar Helmholtz Centre for Ocean Research Kiel, together with colleagues from Canada and Australia, have now identified the origin of this so called pumice raft: It is an underwater volcano in Tongan waters.

Stones normally do not float in water. This is a truism. But there is hardly a rule without exception. In fact, some volcanic eruptions produce a very porous type of rock with a density so low that it does float: pumice.

An unusually large amount of it is currently drifting in the Southwest Pacific towards Australia. When it was first sighted in the waters of the island state of Tonga at the beginning of August 2019, it almost formed a coherent layer on the ocean’s surface and made it into headlines all over the world.

Various underwater volcanoes were discussed as the potential source of the pumice. A team of international researchers has now identified the culprit: It is the so far nameless underwater volcano just 50 km northwest of the Tongan island of Vava’u. „In the international scientific literature, it appears only under the number 243091 or as Volcano F,“ says Dr. Philipp Brandl of Geomar, first author of the study.

On an image of the ESA satellite Copernicus Sentinel-2 taken on 6 August 2019, clear traces of an active underwater eruption can be seen on the water surface. Since the images are exactly georeferenced, they could be compared with corresponding bathymetric maps of the seafloor. „The eruption traces fit exactly to Volcano F,“ says Brandl.

To be on the safe side, the researchers also compared this position with information from stations of the global seismic network that recorded signals from the eruption.

Pumice can be formed during volcanic eruptions when viscous lava is foamed by volcanic gases such as water vapour and carbon dioxide. This creates so many pores in the cooling rock that its density is lower than that of water. „During an underwater eruption, the probability to generate pumice is particularly high,“ explains Brandl.

With the current direction and speed, the pumice raft is expected to hit the Great Barrier Reef off the eastern coast of Australia at the end of January or beginning of February.

Biologists, in particular, are eagerly awaiting this event because pumice rafts may play an important role in the dispersion of fauna in the vastness of the Pacific Ocean. Plants or animals may use the stone for a travel to new frontiers.