Republished: „Stories in Stone. Travels Through Urban Geology“ by David B. Williams 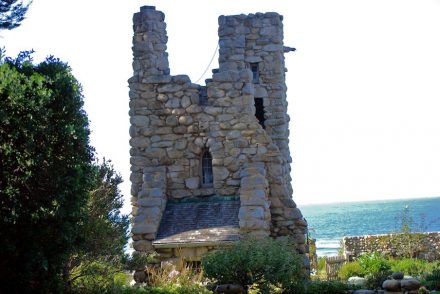 We publish the book’s Chapter 3 which is about Robinson Jeffers’ famous Tor House built of rocks at the coast in Carmel, California

In „Stories in Stone. Travels Through Urban Geology“ David B. Williams from the blog Geology Writer takes his readers on explorations to find 3.5-billion-year-old rock that looks like swirled pink-and-black taffy, a gas station made of petrified wood, or a Florida fort that has withstood 300 years of attacks and hurricanes, despite being made of a stone that has the consistency of a granola bar, and many more. With his kind permission we publish one of the chapters of the book which has been republished by The University of Washington Press with a new cover and at cheaper cost as it is now available in paperback instead of hardback.

Chapter 3: Poetry in Rocks – Santa Lucia Granodiorite:
Robinson Jeffers, one of the great American poets, exemplifies the direct connection between people and stone. In building his Carmel, California, house by himself from boulders he collected on the beach, he developed a connection with place that gave him one of the most distinctive voices of American poetry.

„My fingers had the art to make stone love stone,” wrote poet Robinson Jeffers in a poetic tribute to the small house where he and his wife Una lived. His intimate knowledge of rocks came from the years he spent finding, carrying, and placing boulders for the exquisite little home he built on a barren knoll jutting out into the Pacific Ocean in Carmel, California. During the 44 years he lived at Tor House, as he and Una dubbed it, Jeffers developed what Loren Eisely called „one of the most uncanny and complete relationships between a man and his natural background, that I know in literature.“

Jeffers’ deep relationship with rock played a major role in his poetry. I love his imagery of rocks as the „bones of the old mother” or the „world’s cradle.” Waves are „drunken quarrymen/Climbing the cliff, hewing out more stone for me.” The surf „cheerfully pounds the worn granite drum.” During erosion the „hills dissolve and are liquidated.” And in a stunning description of an earthquake, „the teeth of the fracture/Gnashed together, snapping on each other; the powers of the earth drank/Their pang of unendurable release and the old resistances/Locked. The long coast was shaken like a leaf.”

Robinson and Una moved to Carmel in 1914 and began construction four years later. To learn how to build with stone, he hired a local stonemason and apprenticed with him. They used stones from a nearby beach and transported them on a horse-drawn cart. Finished in mid-1919, Tor House consisted of a main floor guest room, two attic bedrooms, living room, tiny kitchen, and bathroom. They had running water but no electricity. Heat came from the fireplace and light from candles and kerosene lamps. The name Tor House refers to the craggy hill, or tor, on which they built.

A year later Jeffers started to build a 40-foot-tall tower, known as Hawk Tower, as a retreat for Una. Again, he carried each stone, some up to 300 pounds, from the nearby beach up to the site. To raise the stones on the tower, he rolled them up planks. Once he reached about 20 feet, he built a block and tackle contraption to hoist the rocks. Jeffers completed Hawk Tower in four years. Later constructions projects includes adding a dining room and additional wing to Tor House.

Although Jeffers only had to walk tens of feet to reach his building stone, the rock itself had traveled several hundred to a thousand miles to reach the small beach below his home. Jeffers’ primary building material was an igneous rock known as the Santa Lucia granite, which outcrops along the Carmel beach north of Point Lobos. It is an unusual rock characterized by one- to three-inch long, blocky crystals of white feldspar.

Geologists do not know exactly where the granite formed. They agree that a subducting plate generated the heat to create the magma that became Jeffers’ building material. It cooled several miles beneath the surface about 100 million years ago and is part of a large block, or terrane, known as Salinia, which stretches along the central coast of California. They further agree that movement along the San Andreas fault system has propelled Salinia north. What they don’t agree on is whether that ancient magma cooled in Mexico or in California.

The debate over Salinia involves what has been called „one of the most significant tectonic concepts of the past decade,” the idea that western North America grew from the accretion of foreign, or non-local terranes. Over the past 20-plus years, geologists have discovered that many parts of California, Oregon, Washington, British Columbia, and Alaska consist of slabs of rock that formed hundreds to thousands of miles away from their present location and then were carried by plate tectonic movement to a collision with North America. This discovery has also had ramifications for understanding plate tectonics around the globe.

I fell in love with Tor House the first time I saw it. The house and Jeffers’ poetry exemplifies my search for developing connections to place. I fully understand his line „My ghost you needn’t look for; it is probably here, but a dark one, deep in granite.”