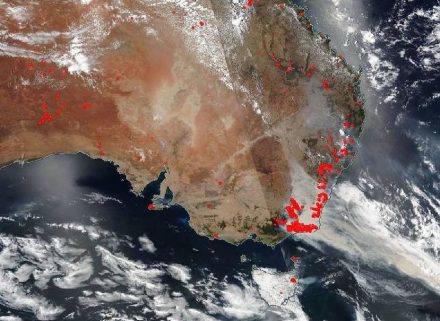 A Nasa satellite captured imagery of the fires and the resultant billowing smoke cascading off the edge of Australia on January 01, 2020. In the province of New South Wales „there is almost no area which has not been affected to date“, is said on an Australian website.

Statues is a US-company that produces sculptures on demand.

Cosentino’s artificial stone Dekton is the material for the kitchen installed for the Cité Internationale de la Gastronomie during October 2019 in Lyon, France. The event is a meeting of top chefs and aims to commemorate the city’s tradition of haute cuisine.

Scientists of Cincinnati University have discovered two beehive-shaped tombs with stone walls in Pylos, Greece dating from the Bronze Age and containing a trove of engraved jewelry and artifacts.

Swedish company Scania tells the story of a Carrara truck drivers’ family for its own promotion.

Video of the Month: a lot of marble is shown in the video of a „Dream Bedroom“ by Italian Longhi company. The manufacturer of elegant furniture uses the film to present its products in a noble ambience.