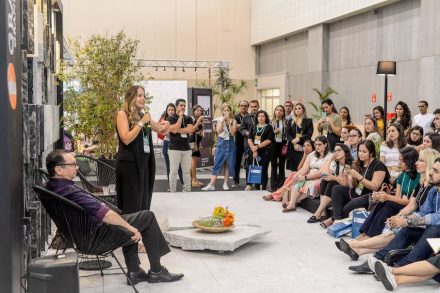 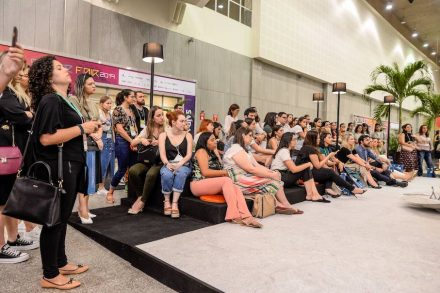 The state of Ceará, what with its rich deposits and favorable transport connections, is an emerging stone center of the country

Update: In December 2019 the stone associations from Brazil’s major exporting states (Espírito Santo, Minas Gerais, Ceará) have joined forces to step up their efforts and increase exports, according to press reports (see link below). Apparently there is dissatisfaction with the federal association Abirochas.

The focus of this year’s Fortaleza Brazil Stone Fair (FBSF) was on architecture, interior design and product design with natural stone. There were lectures and events; as an example we show above a photo of the discussion series with which Granos company brought design students and young designers together. According to the Fair’s Organizers, some 500 visitors from the target group attended. All in all, the fifth edition of the Fair, which took place from November 5th to 7th 2019, attracted around 5000 visitors.

Other parts of the program were the Future Forum, where experts talked about the future of the stone industry in 50 years for the second time running (see link below). The tenth Symposium on natural stones in Brazil’s North East (X. Simpósio de Rochas Ornamentais do Nordeste) with numerous lectures and a poster session took place simultaneously on the fairground. A central topic here was „Diseases of natural stone“ (patologias em rochas), i.e. damage caused by faulty implementation.

45 exhibitors showed their products during the three-day Fair in Fortaleza, Ceará Province’s capital. We recall that there were a mere 16 exhibitors at the Fair’s opening five years ago.

Ceará is situated near the equator where Brazil juts into the Atlantic. It is considered to be a start-up center for the stone branch. What with its many storage facilities with a wide range of varieties, the most prominent of which are characterized by their unusually wild and expressive colors and structures.

Ceará has a unique position worldwide with its quartzites, which are currently in great demand. This stone is very hard and can be quarried and processed only since a few years.
Branco Ceará Granite is the best-known stone from this State and has been used in building airports or shopping centers all over Brazil.

According to a press release by the Stone Association of Ceará (Simagran-CE), approximately 4000 m³ of granites and quartzites are shipped monthly to the remote southern state of Espírito Santo. There they are processed and then transported back north, mostly as slabs to the USA.

This, it is predicted, will change in the future, so that the added value will fade away in the North. Association President Carlos Rubens Alencar sees his State on a growth curve: „Whereas in 2015 only 14 companies in Ceará were dedicated to the prospection and extraction of stones, the number has now risen to 55.“ 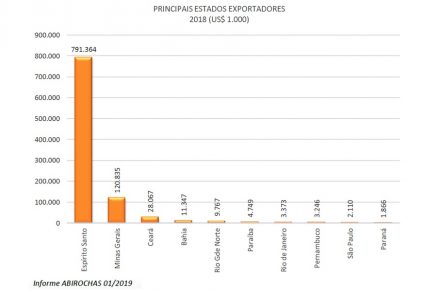 However, the gap between Ceará and the industry leader Espírito Santo is still enormous: according to the Brazil-wide federal association Abirochas, Espírito Santo exported stone products worth a good 791 million US-$ in 2018. In second place was Minas Gerais with almost 121 million US-$, followed by Ceará with a good 28 million US-$.

But note that the new kid on the block has been growing steadily, while the other two have been declining proportionately in recent years.
Ceará can score points not only with its deposits and its proximity to markets in the northern hemisphere. Its port of Pecém not far from Fortaleza is state of the art and has a free trade zone. Some of the heavyweights of the industry are already building up stone processing plants there or have made declarations of intent to do so.

The main centers of the industry in Ceará are located in the north-east of the State. These are the municipalities of Massapê, Uruoca, Granja, Viçosa do Ceará, Santana do Acaraú, Santa Quitéria and regions like Banabuiú or Mombaça. 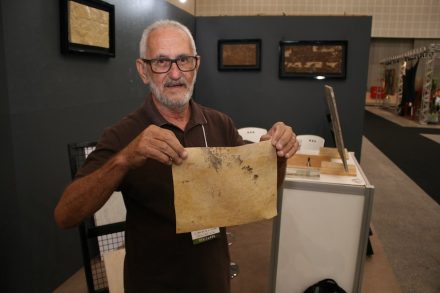 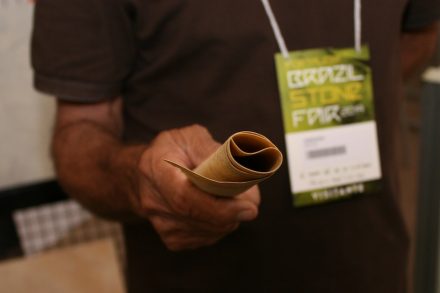 In the meantime, the first marble varieties from Ceará have also appeared on the market, such as San Pellegrino or Cariús.