Swedish researchers: The inscriptions on the Rök runestone are about people’s fear of weather extremes 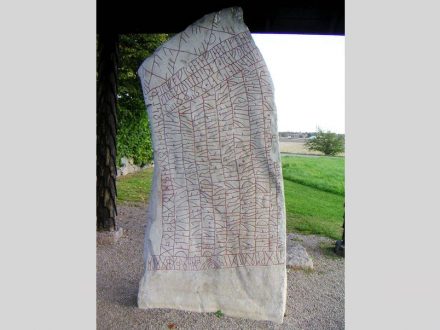 The fight for survival during famines is the topic, not the fight of heroes in battle

The famous Rök runestone in southern Sweden could refer with its inscription to extreme weather events and not to battles and heroes from the history of the Vikings.

The inscription with 760 runic characters on the stone, which is more than 3 m high standing upright in the Östergötland province, is no more interpreted as a heroic report, where the death of a young man is commemorated. „It reveals an aging man’s meditations on his dead son,” says Henrik Williams, Professor of Scandinavian Languages at Uppsala University.

According to the text, the son, a successful military leader, had been called to Odin – but not for after military conflict. Rather, he was to serve the god at „Ragnarök“, the final battle for the end of the world announced in the ancient Nordic myths.

The Vikings had perhaps experienced this end of the world several times in the centuries before 800 AD when the stone was set up. For there had always been strange phenomena: „A powerful solar storm colored the sky in dramatic shades of red, crop yields suffered from an extremely cold summer, and later a solar eclipse occurred just after sunrise,“ outlines the range of such occurrences.

Extreme weather conditions are historically documented, for example in the years following 540 AD: at that time, severe famines had prevailed in Scandinavia (and elsewhere) and half of the population had died.

The trigger for these occurrences was probably the explosion of the volcano Ilopango in today’s El Salvador in 539/540: Huge amounts of ash had been hurled into the atmosphere, which for a few years turned the weather in the northern hemisphere upside down. Recently, researchers had associated the meter-high deposits of the so-called „Tierra Blanca Joven“ in El Salvador with this event.

Of course, people of Viking times could not understand such events – so they associated them with the Gods.

At first glance, the old texts only tell of heroic battles between men; in some cases, however, they may also refer to the final battle of light against darkness or life against death, i.e. the end of the world.

As the Swedish researchers write, there are „striking similarities between the inscriptions on the runestone and evidence of early Scandinavian Eddic poetry, especially the Old Norse poem Vafþrúðnismál“.

The research project involved specialists from the fields of philology, archaeology and the history of religion.