Is there a water cycle deep inside our planet? 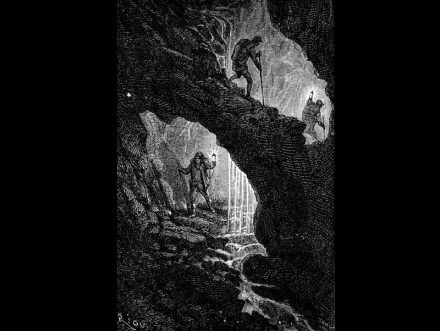 In his book „Journey to the Center of the Earth“, Jules Verne had taken up the topic that had been occupying people until Isaac Newton’s theory of gravitation: how could it be that the Earth was round – would not the oceans’ waters then have to run down from the planets’ edges? Or should there be a water cycle in the interior of the planet, where the water that came from the edges was somehow pumped up again to replenish the oceans?

In the famous book, the French author let his adventurers encounter rivers and oceans inside the globe. We now know that the water cycle is confined to the Earth’s crust.

However, researchers have found that large quantities of water are transported from the planet’s surface to the depths of its mantle between 670 and 2900 km. An international team of scientists recently reported on this in the Proceedings of the National Academy of Sciences.

However, it is not oceans or rivers which play a role in this phenomenon. Instead, the water is dissolved in certain silicate-based minerals. At the so-called subduction zones, these minerals containing large quantities of water go on a slow journey to the interior of the Earth. The investigation in the Proceedings deals with Stishovite, a quartz variant that usually forms under extreme conditions.

In laboratory experiments, the researchers have now exposed Stishovite samples containing water to conditions in the Earth’s mantle, i.e. 320,000 to 510,000 times the pressure on the surface and temperatures up to 1500 degrees. It was shown that the mineral also in such circumstances can contain water.

The researchers are now asking a provocative question: is there perhaps a water cycle deep in the Earth that takes place in geological time periods? What would this mean for our concepts of the Earth system?

Returning to Jules Verne: it was Newton’s discovery that the earth’s mass holds everything on its surface that gave mankind an understanding of the world based on logic and science.

With gravitation, there is suddenly a plausible explanation available for many strange phenomena on our planet: ebb and flow, for example, could be traced back to the fact that our moon with its mass also has an effect on its surroundings and therefore, when it orbits the earth, attracts and takes with the movable waters of an ocean and then lets them spill back.

Proceedings of the National Academy of Sciences