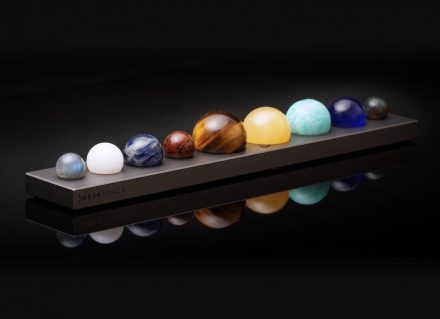 The sun made of yellow calcite shines like a real star / Decoration e.g. for desk or mantelpiece

Our solar system has four rocky planets, namely Mercury, Venus, Earth and Mars. In addition there are the two gas giants Jupiter and Saturn as well as the ice planets Uranus and Neptune. Pluto was recently sorted out by astronomers as a dwarf planet, as it has only about one third of the volume of our moon. Added to this is the Sun, a star that alone accounts for 99.86% of the mass in our solar system and is a huge ball of fire.

All these celestial bodies are now also available in stone, under the name „DeskSpace” launched by designers from Hong Kong as decoration for the desk or the mantelpiece, e.g. 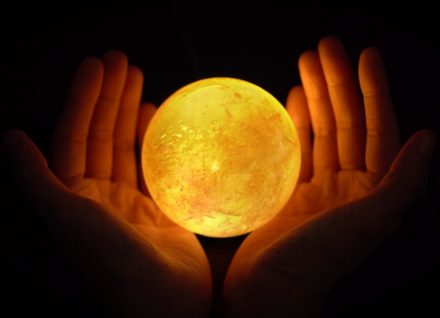 The sun has a lamp inside and shines.

Different kinds of natural stones from all over the world have been selected for the celestial bodies: for the Sun, it is Golden Calcite, for Mercury Labradorite, for Venus Nephrite Jade and for Earth the mineral Sodalite with its typical blue color. Mars here consists of Red Mahogany Obsidian.

The colors of the stones, e.g. for the gas and ice planets, do not necessarily reflect their real image on photos from space telescopes, but rather underline the exoticism of these celestial bodies, as they are still largely a mystery to scientists. 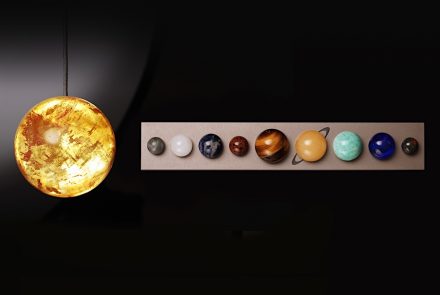 The proportions are not true to scale; the rings of Saturn are only applied in paint. Pluto is still present as a planet.

The 3 designers of Studio DeskX describe how they got their idea: „We have three things in common – a love of design, a fascination with space, and jobs that keep us tied to our desks.“. So they would have simply combined their passion with their professional know-how in this creation. 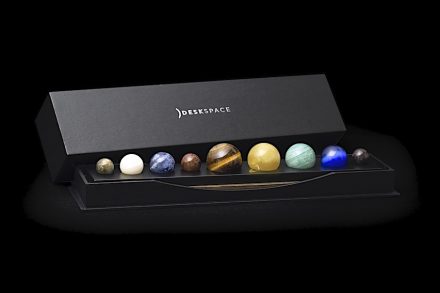 The Sun and the planetary system can also be purchased separately. The arrangement includes a base for the sun and a bar on which the planets are placed. A book gives astronomical information and tells the legends and stories about the celestial bodies.

The emptiness of space and the real distances have to be taken into account.

An animated presentation gives a size comparison of small asteroids, moons, dwarf planets and the giants beyond our galaxy.