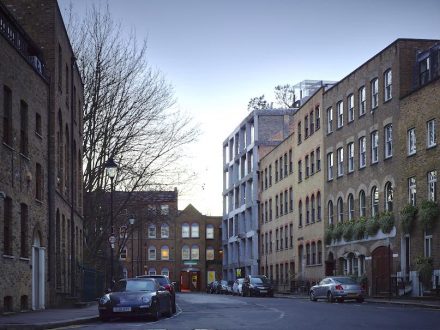 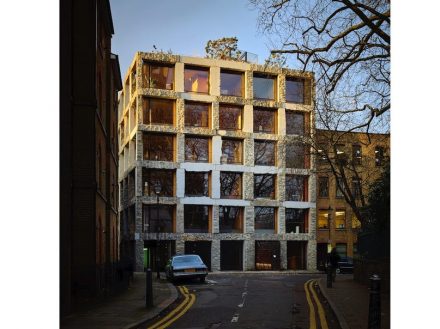 Because of the forbidding costs, no architect today would think of constructing a solid natural stone façade. Or so one might think… However, the English architect Amin Taha has proved the opposite with the building 15 Clerkenwell Close in London, whose material costs are 25% lower than those of a comparable building made of steel or concrete, which for the same reason has a 90% better CO2 balance and, what’s more, has an unmistakable appearance.

Let’s sort out the many aspects of architecture that have been mentioned here and start with the prehistory of the terrain that used to be on the outskirts of London.

In the 11th century A.D., the Normans had built a convent there using a regional specialty for England: building with freshly quarried limestone, a technology brought by northern seafarers. It was easy to work and hardened out only much later after construction was completed.

In the course of the following centuries there were many episodes with many buildings: Oliver Cromwell was once at home there, some revolutionary activity involving resident Karl Marx and later Vladimir Lenin, and finally the site in the run-down district served as a location for a furniture shop. It burned down in the 1970s.

For the new building in 2018, the client JB Structures chose the young architect Amin Taha, founder of Groupwork + Amin Taha Architects. The Guardian respectfully writes: „He is an architect who is always singular, never identifiable with one camp or style.”

Amin Taha promptly submitted a design for the new building that stood out most clearly from the usual: his new building was given a post-and-beam construction made of solid limestone elements. 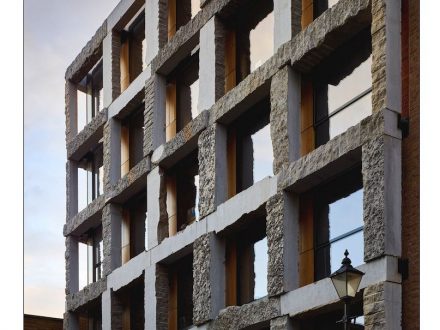 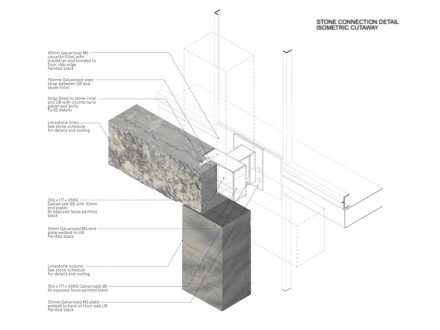 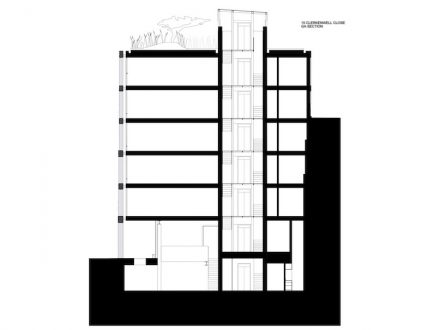 This outer exoskeleton is the outermost element superseding the usual position of the window front of the building. It connects to the ceilings by anchors and plays a supporting role for the statics of the whole building. 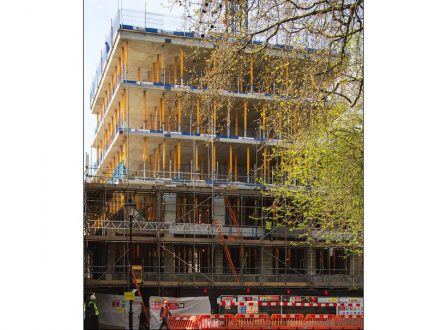 This made it possible, to construct floors inside without supporting columns or walls, which gives the greatest possible freedom of use and movement.

Details of the construction and the special anchors are described in Facades+ magazine. Among other things, it explains how thermal bridges were avoided.

Natural stone is used here in a way that corresponds to its material properties: as a hard and heavy building material, it can transfer heavy loads from above into the foundations. 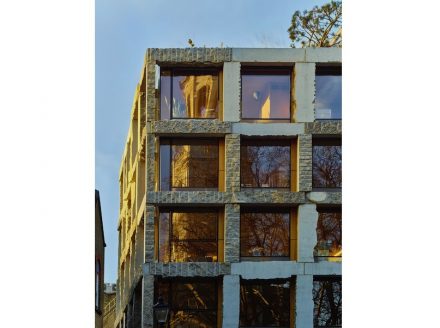 Amin Taha wanted to use the stone to make the many centuries that had passed over the site visible: he expressed this symbolically with the surfaces of the façade elements, some of which are rough as if from the quarry, others smoothed. 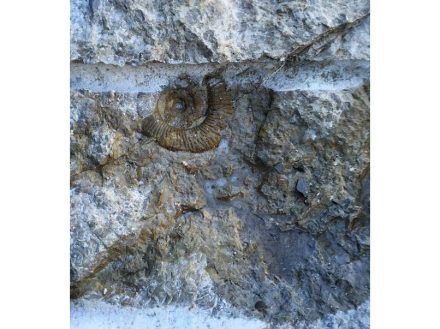 The very large time frame is staged by the type of stone used: Amin Taha had shell limestone imported from Normandy (Lyons-la-Forêt), from the surface of which million-year-old fossils stand out.

The Guardian wrote about the concept: „Stone is celebrated as a living thing, animated by geology and workmanship. It is masonry fromagerie, where the same substance has many flavors. It is a joy to see stone treated like this, when it is so often sliced with deadly precision into emaciated veneers.”

The Stonemasonry Company carried out the natural stonework. All structural engineering work was done by Webb Yates Engineers.

However, in the meantime the borough of Irlington had intervened and demanded that the building be demolished. The edifice would not fit into its surroundings, was the core of the criticism, initially wrapped up in accusations of a formal nature.

Interested parties can read the details of this part of the story in the links below. The architect himself only comments on the most important argument of the critics: „We’d be somewhat perplexed if music, the visual arts or indeed the sciences limited their outlook and innovations to a criterion of fitting-in.“

After lengthy debate, at any rate, Amin Taha was able to assert himself in court against the decisive official. After all the effort, this was almost Pyrrhic victory, that’s how much strength it took, the online magazine Dezeen quotes the architect as saying.

After all, the project was awarded the Riba Prize of the Royal Institute of British Architects several times and was also nominated for the Stirling Prize, Britain’s most important award for architects.

On the other hand, it was also shortlisted for a magazine’s Carbuncle Cup, which aims to identify the worst architecture in a year.

The building has seven floors. Eight apartments are located there. One of them is occupied by the architect himself. There are also offices, one of them his own.

A few more details:
* the roof is designed as a garden,
* there ends a „glazed solar chimney”, which provides natural ventilation in the building. This also improves the energy balance of the building;
* the fire safety of the facade is particularly high because of the material,
* in a courtyard open to the public, there is a Paving made of coarse pebbles and again stone and also iron remnants, which refer to the buildings of the past;
* remarkable is, among other things, a piece of stone at the foot of the facade, which lies there like a ruin from a distant time. 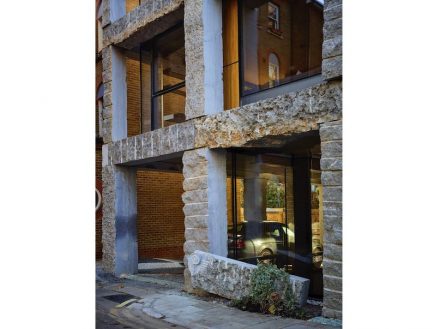 The Guardian commented on the architect’s work: he wants to get inspiration for his designs „from all directions, from living people, from history, from geology”. His general aim is „is the creation of buildings for living and working, which manage to add to the richness and enjoyment of their streets.” 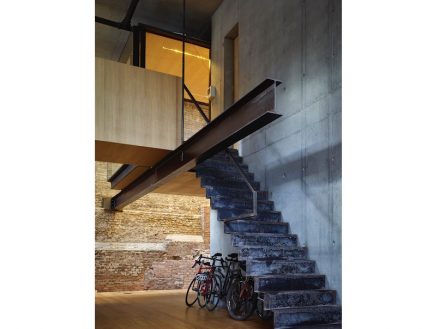 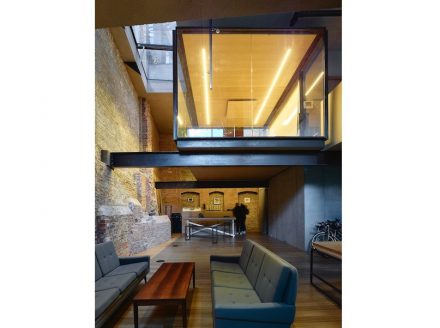