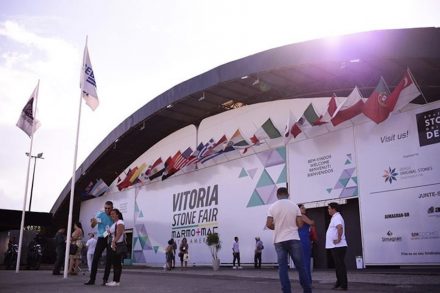 A special promotion for the local stone branch was renewed at this year’s natural stone fair in Vitória, Brazil: for business transactions realized during the fair (February 11-14), the payment of the ICMS tax was postponed until June 9, 2020. The tax is levied by the state of Espírito Santo. The number of exhibitors was around 180, according to the list on the webpage (1, 2).

Stone+tec fair in Nuremberg (June 16-20, 2020) will have an exhibition of design with natural stone. Companies interested in showing their products may contact Peter Becker from Stone-Ideas.com (Mail).

Scientists have released footage of a 3 km long and up to 9 m deep crack in Arizona. The cause of the phenomenon may be groundwater pumped up for agriculture purposes. As irrigation is common in Arizona the question is if that could cause a new problem (video).

„Inovstone 4.0“ was a Portuguese project aiming to bring advanced digital technologies to the country’s stone sector. Its budget from 2017 to 2020 was a good 7 Million € of which 4 million came from the European Union (Portuguese 1, 2).

A training in drystone walling will be held in Agey, close to Dijon in France on April 02 and 03, 2020. One of the organizers is the Fédération Française des professionnels de la Pierre sèche (French 1, 2).

Which fossils of our era will future generations in 100,000 years or so find? An answer comes from University of Illinois at Chicago paleontologist Roy Plotnick in the journal Anthropocene: it will „be mostly cows, pigs, sheep, goats, dogs, cats, etc and … a huge number of complete hominid skeletons, all lined up in rows.“ That will be a clear aftermath of the Antropocene where humans are dominating the world.

„Will the White House Order New Federal Architecture To Be Classical?“ rumors about an executive from the US-government ask. An important material for classical architecture has been natural stone (1, 2).

The Administration in Indian Mandya District has banned stone quarrying and any sort of blasts within 20 km around a dam.

Cooee Design is a company from Scandinavia which has small sculptures and objects made of limestone and marble (1, 2).

Video of the month: Hiroyuki Asakawa is a Japanese stone sculptor. Children love his tracks for marbles realized in different versions (1, 2).