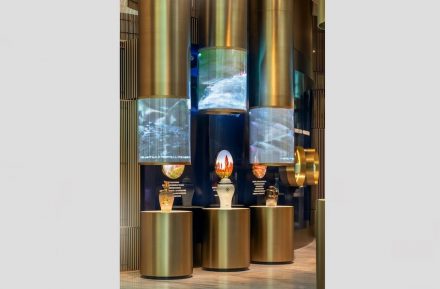 The designers of the Ippolito Fleitz Group underline the high quality as the core of the brand with marble, among other materials

Baijiu is a well-known spirit in China – don’t tell anyone now: a schnapps. The producers of the drink want to place it worldwide and want to put it in the rank of famous other brands. One step along this path is the new Experience Store in Shanghai, where the Guiniang Group presents the image it has created and give customers the opportunity to try it out. The store was designed by the German Ippolito Fleitz Group, which calls itself an „identity architects”.

Their designers paid particular attention to the materials used in the store in Shanghai: „Everything is crafted in a very precise and high-quality way – from marble floors to an elaborate lamellae ceiling, designed to recall the overlapping silhouettes of the Guizhou mountains”, according to a press release.

The so-called „white alcohol” is produced in the province of Guizhou in southwest China. For a long time it was considered difficult to access and has a mountainous landscape with extraordinary waterfalls. The „mysterious atmosphere” of the country and its people has been a „fertile ground for our creative approach”, according to the designers. 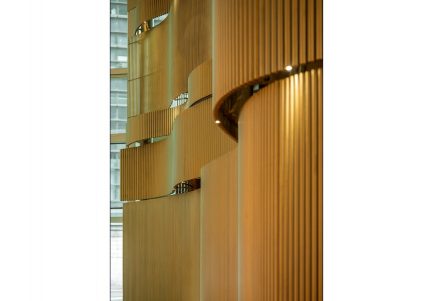 The blind thus appears to be encapsulated within itself from the outside. At the same time, however, the slat structure of the outer walls promises openness and arouses the visitor’s interest in what may be hidden behind them.

Inside, there are various zones such as the „Tasting Bar” for testing the products or the „Shelves that hold the brand’s hero products”. One zone merges into the other. 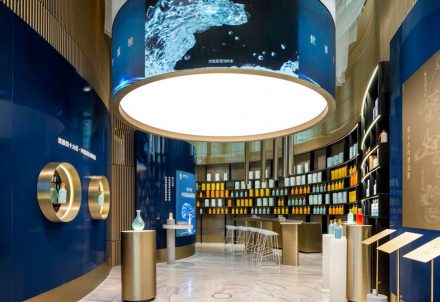 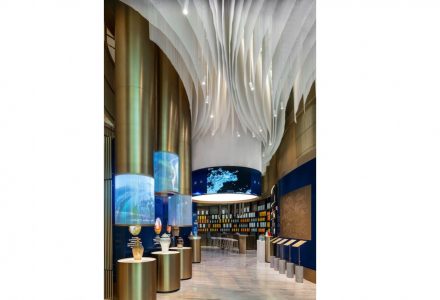 Drama is created by glass cylinders hanging from the ceiling (see photo above). One is so large and designed as if it were a place for the expansion of consciousness and profound knowledge. Well, some people claim that problems are soluble in alcohol…

The materials used reflect the brand essence of Baijiu: high quality on all levels. „The elaborate distilling process, treasured ingredients, a high product quality and an exclusive production volume are the core brand values of Guiniang that encounter visitors to the store”, writes Ippolito Fleitz.

All in all, the manufacturer’s self-image and its self-representation in the Experience Store are as follows: „Guiniang presents itself as a brand on an international level, as an urban and sophisticated friend, whom you would be happy to meet for a drink.” 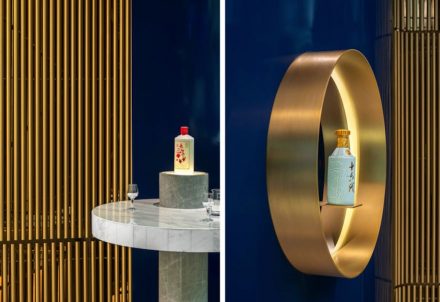 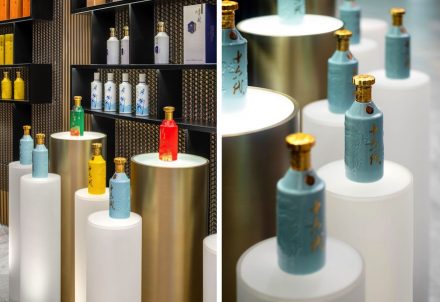 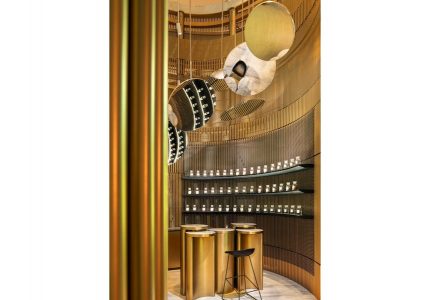 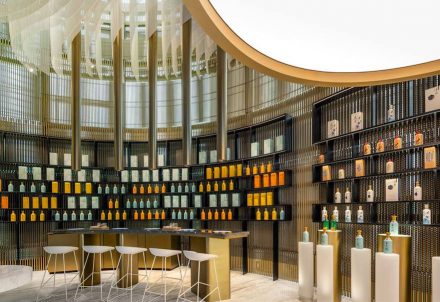 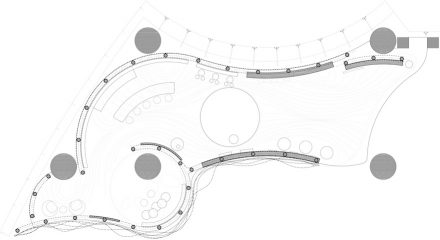