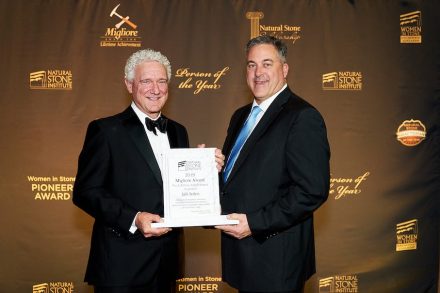 Included are the Migliore Award for Lifetime Achievement, the Women in Stone Pioneer, the Natural Stone Craftsman of the Year, and the Person of the Year

Jack Seiders, see photo above, (Architectural Granite & Marble) is the recipient of the 2019 Migliore Award for Lifetime Achievement . In his letter nominating Seiders for this award, Jim Hogan only needed ten words to put his career into perspective: „Jack Seiders is a titan of the natural stone industry.”

Seiders’ career in the natural stone industry began in the 1970s with his father-in-law Tom Wilson, owner of Capital Marble and Granite. The next forty years would include developing a state-of-the-art stone processing facility, serving as a top sales and marketing executive for one of the stone industry’s largest companies, developing his own company, and becoming a major force in strategic direction for what was then the Marble Institute of America.

Jack’s impact on the industry began when he was elected to the board of directors of the Marble Institute of America in 2003, ultimately becoming board president in 2007. While serving on the board, Jack insisted on two priorities. „We wanted to be involved in promotion of natural stone and we wanted to be the leaders in technical education for natural stone.” He started the Artisan Group with a focus on building membership among successful fabricators across the country and insisted that all Artisan Group members also become accredited. That commitment infused a number of fabricators as early adopters of the Natural Stone Institute accreditation program.

In 2008, Seiders played a major role in the industry’s response to the radon crisis. He was also a key advocate for the utilization of a check-off program, which remains an industry priority. Some early fruits of that promotional emphasis have been realized through the association’s Use Natural Stone campaign and education to the design community.

Additional contributions have included hosting multiple association seminars and supporting the safety committee, which led to the creation of a vast library of slab handling and silica training materials. The Natural Stone Institute and the industry at large continue to benefit from Jack’s original strategic vision. 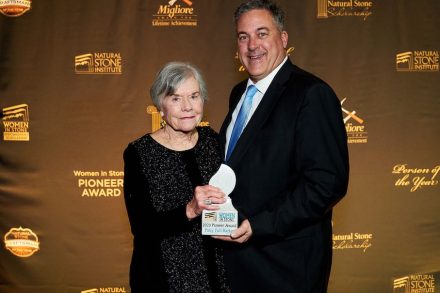 Patsy Fell-Barker (BG Hoadley Quarries) is the recipient of the 2020 Women in Stone Pioneer Award. As the wife of a fourth-generation owner/operator of BG Hoadley Quarries, Fell-Barker was destined to enjoy an active role in the stone industry. After the passing of her husband, Bert Hoadley Fell, Patsy become very involved in the business. She was determined to see the family name continue in the stone industry and wanted their company to survive. She was determined to continue her husband’s legacy and even sold her home to buy their first saw. She reinvested all she could and righted a sinking ship.

Patsy served on the Building Stone Institute board of directors from the late 70s until early 1982. She commented: „They felt that I could do the job, bring a new perspective of women being on the board, which hadn’t happened before.” She earned the BSI’s prestigious “Man of the Year” designation in 1981 and went on to serve as secretary of the BSI board in 1989. In 1992, she became the association’s first female president.

Patsy’s inherent success has always been driven by her passion for natural stone. She says: „I don’t care where you go, the most beautiful buildings and the ones that seem to be aging the best are those that were made from natural stone.” Her advice to women just entering the industry is to be willing to make sacrifices, which Patsy has, and to never give up. She recommends looking in the mirror every day and saying, „I am capable of doing this today.”

Patsy continues to set an exceptional example by still going to work every day. On receiving this award, she commented: „It’s very special to me. I hope it will be an inspiration for my family to continue to work as hard as they do now.” 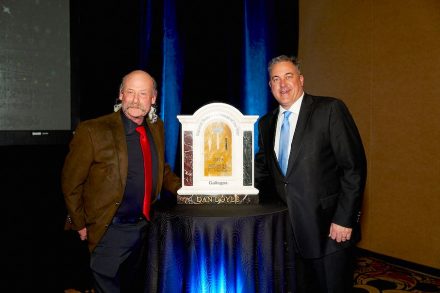 Dan Doyle (The Gallegos Corporation) is the recipient of the 2019 Natural Stone Craftsman of the Year Award. Dan Doyle epitomizes what a dedicated tradesman in the stone industry can accomplish. He joined The Gallegos Corporation in 1988 as a brick and rubble stone mason and has been indispensable to the company ever since. Dan’s colleague Dave Little, Chief Business Development Officer at Gallegos, believes Dan’s ability to understand what clients are looking for has earned him a good reputation of accomplishment. His skills and ability to converse with designers, owners, and contractors have contributed to repeat business. „They want Dan on their project because it gives them a sense that it’s going to be completed on time and it’s going to be what the owners want,” Little said.

Recently, Dan has begun acting as a tile and slab installation instructor for Gallegos, acting as a mentor. On the job, his colleagues are learning just by working alongside him and seeing how he reacts to the requests of architects. He takes the time to tell them what is or isn’t possible and why.

Dan enjoys communicating with architects, but his real satisfaction comes from sharing his skills and experience with his coworkers. „It makes you feel good. You know that you have learned a few things over the years, and it’s nice that you can help someone out to further them along.” Dan’s coworkers are inspired by this award. Travis Preston, a member of his crew, commented: “This is an award that I have heard about through the years. It was a true inspiration, and I even joked around with him that ‘hey, you just gave me a new goal in life.’ This is something that I’m going to strive for.”

Receiving this award has meant a lot to both Dan and his father, but he attributes this success to the team at Gallegos. “I would like to thank the Gallegos Corporation. Suzanne Gallegos, her husband Gerald—he was the bomb. Gary Woodworth, Daryl Woodworth, all the PMs. Can’t do it without them. They’re all good people.” 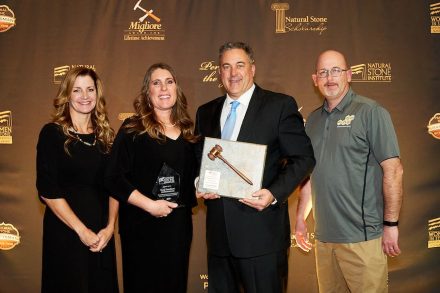 Greg served as the association’s board president in 2019, earning accolades from many of his peers. He has been described as a natural leader, a great problem solver, a good listener, and a dedicated advocate. Greg cares about every segment of the industry and constantly looks for ways to bring the industry together for one common goal.

Greg has been a tireless advocate of legislation in Washington DC to further advance the industry’s check-off efforts. He has been outspoken about the need for companies to subscribe to sustainable business practices and has donated stone to several Gary Sinise Foundation R.I.S.E. program homes for severely wounded veterans. He has attended membership outreach meetings and industry meetings at both domestic and industry trade shows.

Natural Stone Institute Executive Vice President Jane Bennett commented: „His sacrifice in service is admirable—not only to the industry, but to his neighbors and his church. What has impressed me most about Greg over these past few years is his personal and professional growth. He has eagerly volunteered to learn about aspects of the industry that previously weren’t part of his daily vocabulary. He is now truly a global leader.”

Greg described his past year of leadership this way. „The thing I can take the most pride in as president and in a leadership role is the synthesizing of so many different parts of our industry—the promoted collaboration and having people work together that didn’t work together before. I choose to volunteer with the Natural Stone Institute because I believe it’s important that we give back. This industry gives me, my family, and my employees their livelihoods. I believe it’s important to give back for the future of the industry.”

Greg isn’t done contributing. In 2020, he will lead multiple committees and increase his involvement with the Gary Sinise Foundation’s R.I.S.E. program.