European Capitals of Culture in 2020: Galway in Ireland and Rijeka in Croatia 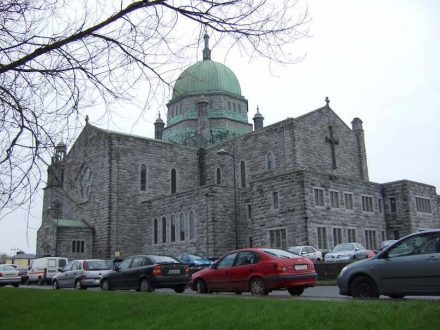 As usual, the editorial staff of Stone-Ideas.com looked up what both have to offer in terms of natural stone

Galway in Ireland and Rijeka in Croatia are European Capitals of Culture for the year 2020, both are situated on a sea coast, Galway on the Atlantic Ocean and the locals like to say that the next stop from here is only America; Rijeka is on the warm Adriatic Sea and was a pirate’s nest in ancient times until its sailors disrupted the Romans’ trade traffic across the Mediterranean too much and they brought the matter to an end.

As usual, the editorial staff of Stone-Ideas.com looked up what both have to offer in terms of natural stone.

In Galway the visitor immediately notices the cathedral. It is built of local limestone. It dates back to 1965, when new concrete churches were built some time ago. The choice of material probably goes back to Bishop Michael Browne, who was also responsible for the mixture of styles inside.

In the city of about 80,000 inhabitants, one often finds houses whose façades are clad in natural stone. Such designs are popular all over the British Isles, sometimes lovingly built by hand, sometimes only as prefabricated elements made of thin stone straps. 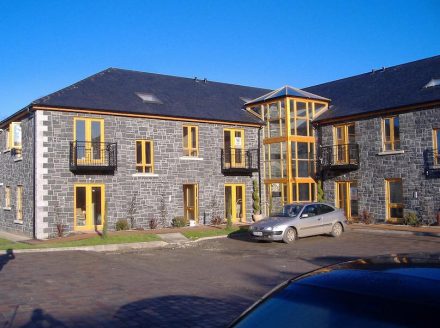 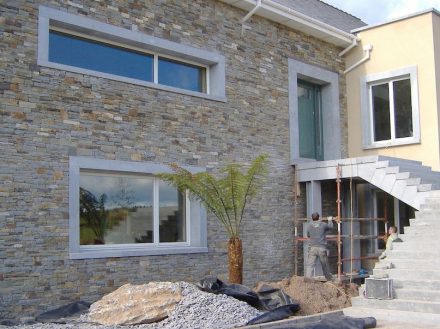 Our photos show two typical houses with local Kilkenny Blue Limestone, on the lower one with this stone only around the windows.

A famous natural stone variety from the nearer surroundings is the Connemara Marble, a serpentinite with strong green veins. It was mined over many years in the county of the same name and was a popular commodity in the otherwise poor area. A similar stone is the Verde Antique, which is also found in Greece and was already very popular with ancient sculptors. The stone was also used in the church St. Nicholas. 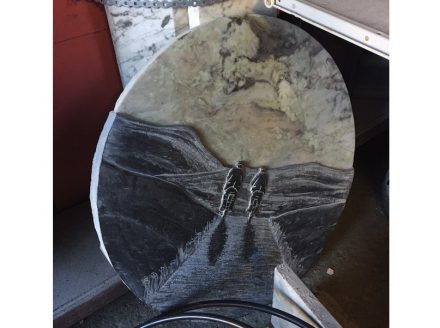 Connemara Marble has become rare in Galway today. Our photo shows an artist’s work with the marble as background and Kilkenny Blue Limestone in front.

Walks through the city 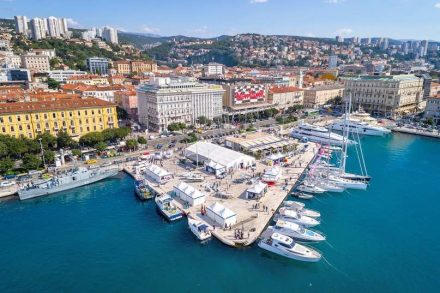 Rijeka has never been really rich in the past centuries, so you will not find anything really outstanding in natural stone there either. There are ruins from Roman times, a medieval fortress, magnificent palaces from the Habsburg era, squares with Italian flair and then there are the buildings from the Yugoslavian era.

At the time, the city of 25,000 inhabitants was declared a model socialist city, and within a short period its population increased to ten times that. Shipyards, refineries and factories were built, which have been largely unused and dilapidated since the end of socialism.

The primary goal of the city administration in connection with the Capital of Culture is therefore to give these sites a new function. 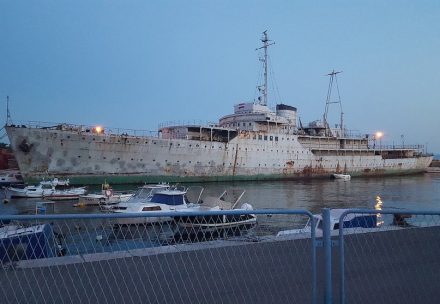 Among them is the ship „Galeb” (seagull) which has been rusting away in the harbour for years: formerly underway on behalf of the merchant navy and the military, it was later the private yacht of the head of state Tito. It is now to be converted into a museum.