China’s economy is slowly recovering: at least in imports there was an increase of (+)2.4% in March 2020 compared to the previous year 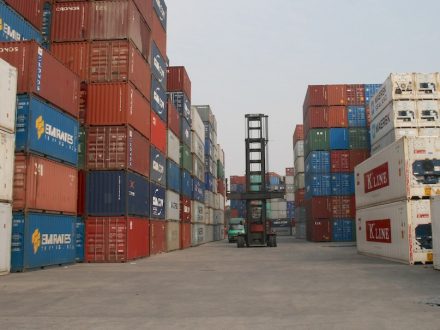 China’s economy is gradually picking up speed again: in March 2020, there was only a (-) 3.5% drop in exports compared to the previous year (for comparison: January/February: -17.2%). Imports even increased by (+)2.4% (January/February: -4%). Overall, China’s foreign trade in March remained almost stable compared to the same month of the previous year (-0.8%; January/February: -9.5%). These are the latest figures from China’s General Administration of Customs (GAC), presented by spokesman Li Kuiwen to an international press in Beijing in mid-April 2020.

When asked about the estimates for the coming months, Li emphasized that domestic demand in China was strong again. Imports of some raw materials, electronic components, and consumer goods rose by (+)13% and more in the 1st quarter of this year. „China’s strong domestic market is helping to create global demand,” Li said.

Due to the recovery in March, the first quarter in 2020 was less dramatic overall than had to be feared after January and February: total foreign trade was still down by (-)6.4% compared to the same period in the previous year. It was (-)11.4% for exports and (-)0.7% for imports.

The government in Beijing is trying to help the economy restart, according to Li. Measures taken include simplifications of customs clearance. In particular, the main issue is to revive production, also of foreign companies in China. Support is very much on such firms and their suppliers.

According to the Ministry of Economic Affairs, the situation at the moment is that by April 09, „76% of key firms in the production having recovered over 70% of their production capacity as of April 09.” Li repeatedly highlighted the strength of domestic companies: „We must also see that China’s foreign trade is tough and competitive, and China’s enterprises have strong innovation and market development capabilities.”

However, the situation is differing from province to province, as we learned from Chinese sources: while in the industrial regions in the south and east along the coast, everyday life has mostly returned – with breathing masks as a duty – the restrictions e.g., in Beijing are still drastic.

Despite the corona crisis, China’s trade with Asian countries continued to grow in the first quarter of 2020. With the ASEAN countries (+)6.1% was achieved. They are now China’s most important trading partners and account for 15.1% of its foreign trade. Vietnam and Malaysia, in particular, achieved strong growth rates, both in terms of buying Chinese goods and in deliveries.

With the countries of Belt and Road, from January to March 2020, there was a growth of (+)3.2% compared to the same period in the previous year.