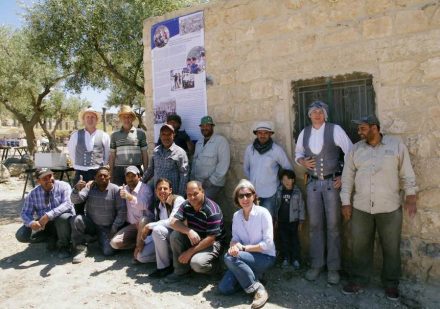 The German Archaeological Institute (DAI) is conveying stonemasonry know-how to young people from there in a project in Jordan. On the one hand, the aim is to win over experts for the conservation of the ruins of Gadara, on the other hand, the aim is to gain appreciation for the excavation site among the people.

Last but not least, war refugees from nearby Syria also play a role in the project. Finally: the archaeologists themselves want to learn stonemasonry know-how of today and thus better understand how their ancestors had built their stone temples and columned structures.

It is about the city of Gadara from Greco-Roman times, situated about 10 km south of the Sea of Galilee and with a magnificent view of the water. Today it is called Umm Qays.

Since 2016, the German Archaeological Institute (DAI) has held courses there for 5-7 weeks twice a year. Young adults have gradually learned how to work with ashlar.

In 2019, it went one step further: when renovating an old farmhouse, the course participants were able to use the previously produced stones or secure the existing material.

Such skills offer good career prospects: in Jordan, there are entire communities built of stone. Umm Qays is also a village made entirely of stone.

Refugees from nearby Syria are also involved in the project. For them, the skills are essential because building with stone is still popular in their home country.

The aim of the courses was also to integrate the refugees into the village community in the host country.

The excavation sites also benefit from the courses. For there, experts are needed who can properly maintain and secure the sites after the scientists have left.

The children are also involved in the project: there are participation programs for them where their interest in the old monuments is awakened. The teachers for these courses are specially trained in a pedagogy suitable for children.

The initiator of the project is Dr. Claudia Bührig from the DAI. Two stonemasons from Germany were involved as trainers. Other experts contributed their know-how, among other things for forging the stonemasonry tools.

The project was and is financed by the German Foreign Ministry.