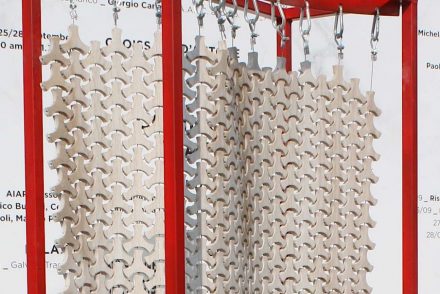 We have repeatedly analyzed the properties of natural stone in reports and described in which products they have been used so far. One property revolves around energy: stone is a good conductor of heat and can also store a lot of heat (which confectioners have been using since ancient times, see link below).

In the same way, stone is an ideal material for thermal insulation, and this is used in curtain walls. However, the limits of its use are narrow: an office room with a glass façade can be protected from the sun’s rays with stone curtain walls, but then the space behind them is in darkness…

… unless you do it like Giuseppe Fallacara, professor at the Polytechnic University in Bari in southern Italy and one of the pioneers of innovative architectural ideas with stone. „Tessuto Litico” i.e. „Lithic Fabric” is the name of his concept, whose prototype was presented last year at the Marmomac in Verona. 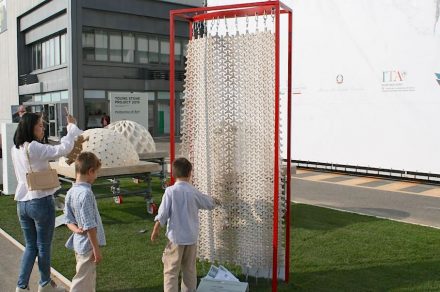 Fallacara’s idea was modeled on plants, for example, the ivy, which strings its leaves together along a thin liana. Now, if these leaves were made of stone, given a shape appropriate to their purpose, and then joined together, one would have a kind of curtain in front of the glass window of the office room as mentioned above: the blazing suns rays would be blocked, but light could still fall into the space behind.

This is exactly what Giuseppe Fallacara did with his Stone Fabric. It sounds easier than it is because the individual elements have to be interconnected. This is done by means of steel cable or wire, as is described in detail in the patent specification. A Swiss company has bought the exploitation rights to the patent. The design as such is (under the number 007762794 from 20.03.2020) protected under trademark law.

The weight of the Stone Fabric is 55 kg/m². It can be about 6 m high (2 floors) in one piece. For more floors you need more suspensions.

Since the wind plays a special role here, the exact loads must be calculated for each facade.

For the prototype shown at the Marmomac, the CNC programming for cutting the „leaves” was done by Francesco Brunetti. The Stilmarmo company was also involved with its Serpeggiante limestone. 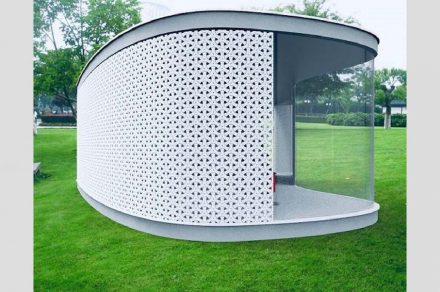 The project fitted very well into the „Naturalità” theme that Marmomac had given to its Italian Stone Theater 2019 in Hall 1: the aim was, among other things, to build bridges between the world of plants and the world of stone.

The architectural tradition around the Mediterranean was also reflected in the Stone Fabric: especially in the Muslim countries, one knows the Mashrabiyas, screens mostly made of wood in front of the windows, which allow a draft of air into the rooms but keep the heat of the sun outside.