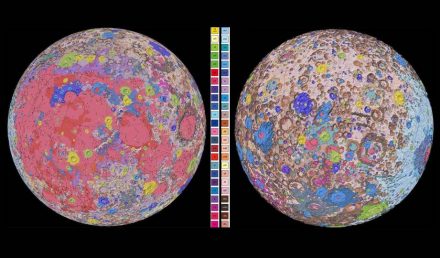 Researchers merged new and old data from Apollo and recent satellite missions to develop a unified description of the stratigraphy, or rock layers, of our nearest neighbor in space

For the first time, the entire lunar surface has been geologically mapped completely and uniformly classified by scientists from the United States Geological Survey (USGS), in collaboration with NASA and the Lunar Planetary Institute.

The lunar map, called the „Unified Geologic Map of the Moon,” will serve as the definitive blueprint of the moon’s surface geology for future human missions and will be invaluable for the international scientific community, educators, and the public-at-large. The digital map is available online now and shows the moon’s geology in incredible detail (1:5,000,000 scale). 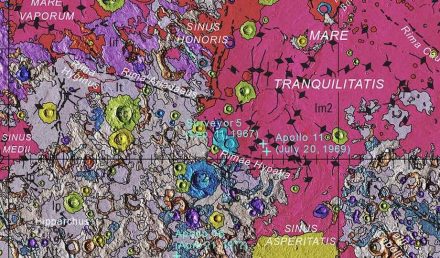 To create the new digital map, scientists used information from six Apollo-era regional maps along with updated information from recent satellite missions to the moon. The existing historical maps were redrawn to align them with the modern data sets, thus preserving previous observations and interpretations. Along with merging new and old data, USGS researchers also developed a unified description of the stratigraphy, or rock layers, of the moon. This resolved issues from previous maps where rock names, descriptions, and ages were sometimes inconsistent.

„This map is a culmination of a decades-long project,” said Corey Fortezzo, USGS geologist and lead author. „It provides vital information for new scientific studies by connecting the exploration of specific sites on the moon with the rest of the lunar surface.”

Elevation data for the moon’s equatorial region came from stereo observations collected by the Terrain Camera on the recent SELENE (Selenological and Engineering Explorer) mission led by JAXA, the Japan Aerospace Exploration Agency. Topography for the north and south poles was supplemented with NASA’s Lunar Orbiter Laser Altimeter data.